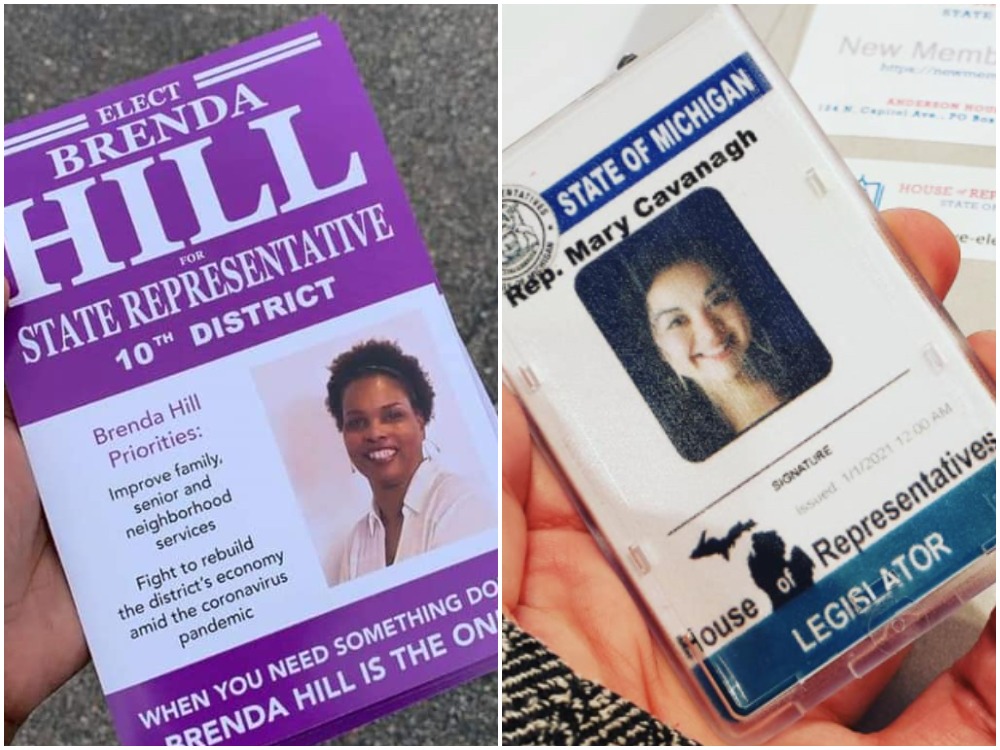 Brenda Hill alleges Mary Cavanagh does not live in the district she won. (Photos: Facebook)

Rumors of carpetbagging are nothing new in Michigan's 10th House District, which covers portions of the west side of Detroit and Redford Township.

Detroit city councilman Gabe Leland was dogged by accusations that he lived elsewhere when he ran for the seat in 2004. Neighbors of the house he listed on candidate forms said he only rented a room there and showed up just a couple times a week to collect mail.

Candidates for state representative are required to live in the districts where they run.

The latest subject of carpetbagging accusations in the 10th is Representative-elect Mary Cavanagh, the 29-year-old daughter of a Democratic dynasty. Her late grandfather, Jerome Cavanagh, was mayor of Detroit in the 1960s; her father, Phil Cavanagh, is deputy treasurer of Wayne County and a former state rep and county commissioner; and her cousin is Michigan Supreme Court Justice Megan Cavanagh.

The rumors came to a head Wednesday morning, as Mary Cavanagh's former opponent, Detroit activist Brenda Hill, conducted what she called a "reconnaissance mission" at the Garden City home where she claims the 29-year-old actually lives. Facebook Live videos posted by Hill, 57, appeared to show the home's occupants in the midst of a move; a truck was pulled up to the house and living room and other furniture lined the street.

The house is owned by Cavanagh's boyfriend of five years; property records show it sold within the past two weeks.

“We don’t need another liar in the district, a sham artist. We don’t need that Cavanagh mafia neither," an animated Hill said as she filmed.

Hill has raised the specter of fraud in her primary defeat; she was in the lead before being knocked to second place when absentee votes were counted. She's called on Secretary of State Jocelyn Benson to investigate.

No one exited the Garden City home for the duration of Hill's stakeout. She said Cavanagh ducked inside when she spotted her.

The secretary of state's website shows Cavanagh listed a Redford address owned by her father when she registered as a candidate. That address is also listed on her candidate website, though the street name is misspelled.

Cavanagh said she was not available for a phone interview Wednesday. In a series of text messages, she said she lived with her father but spent about two days a week at her boyfriend's house, who she's been with for five years. Phil Cavanagh confirmed Mary lives at his Redford home and splits time with her boyfriend's, noting she's currently getting her master's at Wayne State University and that it's not unusual for Millennials to take longer to strike out on their own.

The representative-elect was born and raised in the 10th District. She recently purchased a home there and says she plans to move into it with her boyfriend in the coming weeks. For now, because her father just sold his house, she says she's staying at her mother's, also in Redford.

But Hill insists Cavanagh did not live with either parent when she was on the ballot.

"The people on her mother and father's blocks, when I was canvassing before the primary, they all told me she didn’t live there."

Once she raised the possibility on social media that Cavanagh lived elsewhere, Hill says she began receiving tips the young woman lived in Garden City. One tipster forwarded her an Amazon slip bearing Mary Cavanagh's name and her boyfriend's address.

When questioned, Cavanagh said she sends credit card statements and record keeping packages to the Garden City house because her boyfriend "keeps my records in order, especially as my records keeper during the campaign."

Campaign finance records do not show any payments to her boyfriend. Cavanagh said he volunteered his services.

Hill says residents in the district should be leery of an incoming lawmaker she believes broke the law.

"How can you represent a district that you don’t live in?" she said. "Your priority is going to be where you live. She could have moved into Redford at anytime, but she didn’t until she knew she'd won."