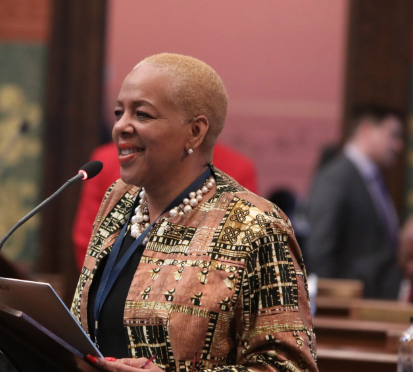 "Your time is fucking coming. You'll see. From the fucking gallows you'll be hanging, c---t," one man said, according to a recorded call the lawmaker posted on Facebook.

The voice mails, received on Saturday, were from a woman from Wheeling, Ill., based on the number associated with the call, which Johnson posted, and from two men, The Detroit News reports. The woman criticized how Johnson questioned a witness and told the representative she'd share the lawmaker's phone number with "a million people."

Johnson was among House members who heard testimony Wednesday from witnesses Trump attorney Rudy Giuliani brought. They offered testimony about alleged voter fraud which has been dismissed by judges as not being credible.

"You’re allowing people to come in here and lie. And I know they’re lying," Johnson said during the hearing.

During the contentious post-election period, Democrats and Republicans have received threats as President Trump continues to push a false narrative of wide vote fraud in Detroit and elsehwere in the country that robbed him of victory.

Monica Palmer, chairwoman of the Wayne County Board of Canvassers, said she received vile threats after she first threatened to not certify the county's election results.