My husband’s driver’s license expired this fall, at the interval where you have to get a new photo taken. This sparked several days of yelling at his laptop while he failed to find open appointments at a Secretary of State branch office anywhere near our house. He finally did, but it was a reminder that Michigan’s current SOS, Jocelyn Benson, promised to end the logjams at these offices, and so has another massive, unfinished job to do once she wraps the election. If it ever gets wrapped.

I thought of Benson this weekend as protesters, some armed because Freedom, gathered outside her house to shout STOP THE STEAL and other hashtag zingers, all while Benson and her 4-year-old son decorated their Christmas tree inside. I would bet my next meager paycheck that the question, Remind me why I wanted this job, anyway? was spoken in so many words at least once within their home that night. 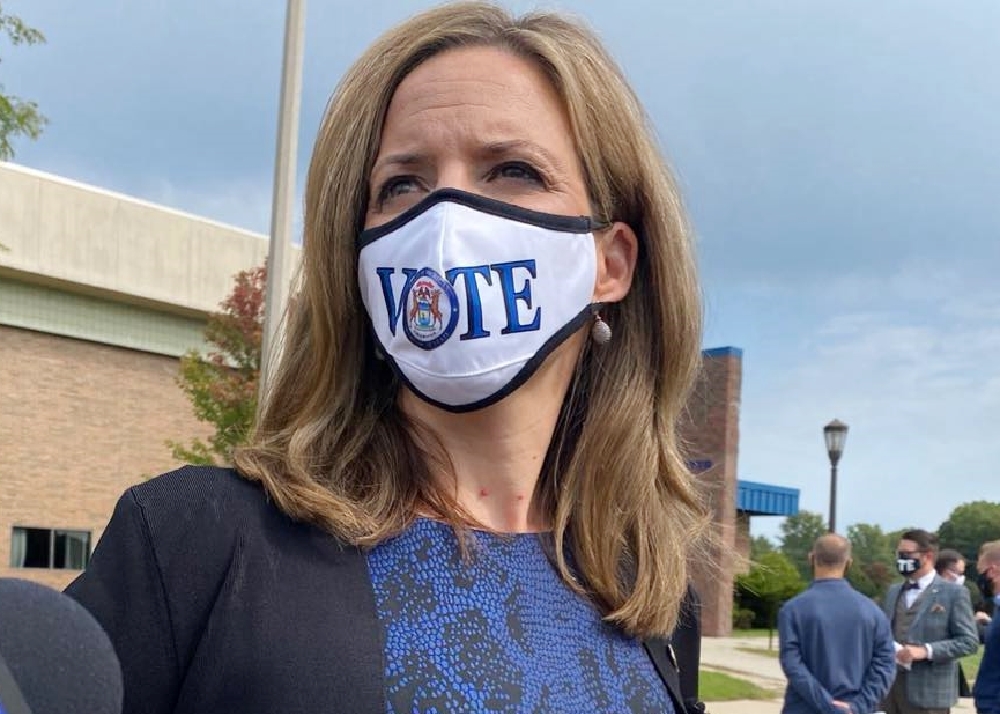 A video of the antics the first night, posted by Trump troll Rob Portis, was interesting. He gives Benson’s full address, an act known as doxxing, which only days ago Trump lovers were screaming about when others did it to Wayne County Board of Canvassers Chairwoman Monica Palmer. That, they said, was a terrible, cowardly thing to do. Doing it to Benson, though – that’s just patriotism.

You can see the same split in the reaction to the shenanigans at Benson’s house. Michigan Attorney General Dana Nessel and Wayne County Prosecutor Kym Worthy released a statement “decrying” it, as we say in journalism (and nowhere else):

I’m sorry to have to say this to Nessel and Worthy, two women with way more education than me, and law-school education at that: What those demonstrators did, what they shouted, even the weapons they carried, was perfectly legal. It was in the great American tradition of stickin’ it to the (wo)man, or what lefties like to call speaking truth to power.

Don’t take my word for it, though. Let’s roll the tape: Did demonstrators gather outside the Manoogian Mansion last summer, shouting abuse at Mayor Mike Duggan? They did. Did protests occur regularly outside the Ann Arbor condo of former Gov. Rick Snyder? Yes. Do similar public outcries happen outside similar public officials’ homes all over the country? Yes. In Chicago. In Kentucky. In Indiana. (I don’t study these things; I just googled the phrase “demonstrated outside the home of” and got more than 20,000 results.)

Is it obnoxious? Of course it is, especially when it’s not a publicly owned home, like the Manoogian Mansion or the White House, where protest comes with the free rent and security team. But you can’t say people don’t run for the big jobs without knowing this could happen.

Which brings me to another point, the one that was made, kinda, by Georgia election official Gabriel Sterling, in his furious, four-minute statement that went viral last week: This has all gone too far. You want to know why so many of our public officials are awful, why legislative bodies and public-agency staffs all over the country are so well-stocked with dummies and liars and ambition-crazed grifters? Look no further than behavior like this, which would seem to demand a much fatter paycheck to tolerate.

You think Duggan, or Benson, or Snyder or any others who watched people waving signs on the sidewalk were swayed by all this? No. Do you think some nice person who might have considered a career in what we still quaintly call “public service” might have had second thoughts? Yes.

After I collect the winnings from my wager, once Benson’s Alexa confirms what she said Saturday night, I’ll double down on another statement I’m confident she or her husband made, this one directed at their preschooler: Kiddo, strongly consider a career in accounting.