Now Texas is trying to disenfranchise millions of Michigan voters 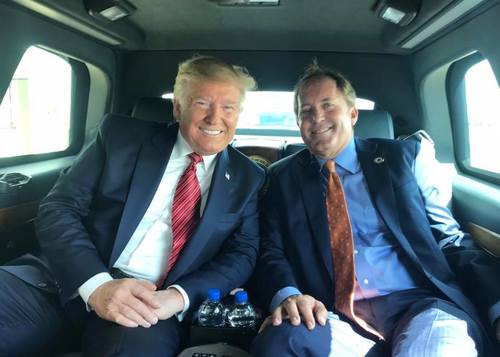 They say don't mess with Texas, but, apparently, Texas thinks it can mess with anyone it wants.

The Lone Star State's Republican attorney general on Tuesday filed suit against Michigan and three other battleground states that went for Biden, asking the U.S. Supreme Court to block them from voting in the Electoral College.

Ken Paxton — a Trump loyalist under FBI investigation for allegedly using his office to do favors for a donor — argues state-level changes to election procedures in response to the pandemic violated federal law. In Michigan, that was allegedly the mailing of unsolicited absentee ballot applications to registered voters — a move the Detroit News reports has been upheld by two state courts.

"I will always fight for voter integrity," Paxton said of the suit on his Facebook page. "We must always make sure our vote is protected and matters."

The effort has little chance of success, the Texas Tribune reports.

"The erosion of confidence in our democratic system isn’t attributable to the good people of Michigan, Wisconsin, Georgia or Pennsylvania but rather to partisan officials, like Mr. Paxton, who place loyalty to a person over loyalty to their country," she said in a statement. "The Michigan issues raised in this complaint have already been thoroughly litigated and roundly rejected in both state and federal courts – by judges appointed from both political parties."