Full-Page Ad to NBA: 'If Black Lives Matter, What Are You Doing About Detroit Pistons Owner Tom Gores?' 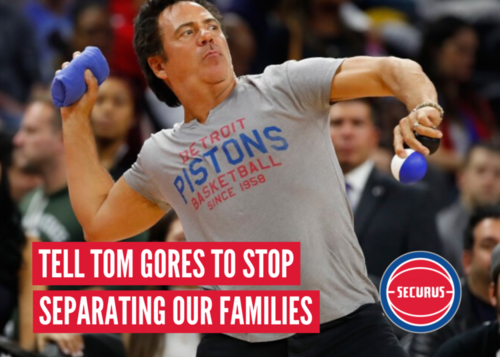 Photo on online petition to get rid of Gores. 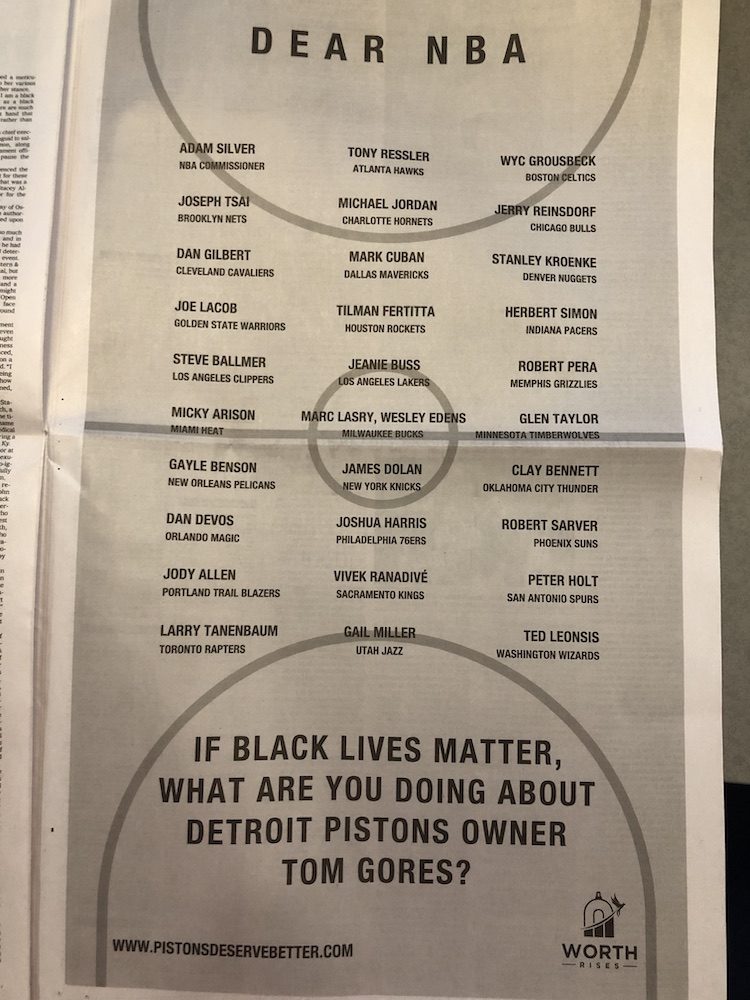 The ad on page 33 of the national edition is from a nonprofilt prison reform group, Worth Rises, that is protesting Gores's Beverly Hills private equity firm, Platinum Equity, which owns one of the nation’s largest prison telecom corporations, Securus. It accuses the firm of predatory pricing for inmate calls, and says that  financially harms families of color.

“Securus provides incarcerated Americans and their loved ones with tools to stay connected, and under the leadership of Platinum Equity we are working to make those connections as affordable and accessible as possible," he said. "Since January our company has reduced the average cost of a phone call to $0.15/minute, cut consumer fees by 30 percent, and made hundreds of millions of calls available free of charge during the pandemic."

Worth Rises describes itself as dedicated to dismantling the prison industry and ending the exploitation of those it touches.

In an online petition headlined "Demand the NBA Force Tom Gores to Sell the Detroit Pistons," the group writes:

Securus rakes in more than $700 million annually by price-gouging families — disproportionately Black, Brown, and low-income — struggling to connect and support incarcerated loved ones. The corporation routinely charges as much as $15 for a simple 15-minute phone call, and piles on sky high deposit fees, among others. Securus then pays correctional administrators and sheriffs millions in kickbacks every year.

As a result of Securus’ predatory practices, which Tom Gores has authorized, one in three families goes into debt trying to stay connected to a loved one behind bars, and 87 percent of the people carrying that burden are women, largely women of color.

While advocates around the country have fought to stop Securus from exploiting families, Gores has done little to help those his decisions have harmed. For our part at Worth Rises, we delivered our demands to Tom in March of 2019 with deadline of end of year 2020 to divest from Securus. We then spent nearly a year in conversation with Gores and his team to no avail. And in January, Gores cancelled a meeting with directly impacted families. ...

He is a prison profiteer who has no place on the board of one of our nation’s favorite cultural institutions: the NBA. Gores should not be allowed to whitewash his active exploitation of marginalized communities by simply asserting that Black Lives Matter, especially in the U.S. city with the highest percentage of Black residents. Gores has to go!

Dr. Benjaimin Chavis Jr., president and CEO of the National Newspaper Publishers Association, writes in a Dec. 8 column on the website AFRO that Gores' company has tried to make good on some promises to implement improvements. He notes that corectional institutions often end up taking a big cut of the phone call profits. In Connecticut in 2018, for example, the government took about 60 percent.

He notes Gores' company has tried to do better than other companies serving prisoners, and so far, according to the company, Securus has reduced costs and renegotiated lower rates with 56 correctional agencies this year.

Was that enough? No. Far from it. But it was an important start, and one that no other company in the prison telecom space has so far matched.

"We are change agents who are committed to transforming not just this company, but the industry to make its products and services more affordable, more accessable and more relevant to incarcerated individuals and their families."

The NBA issued a statement Sunday:

“We understand Worth Rises’ passion for prison reform and have been in regular communication with Tom Gores regarding their concerns.  Mr. Gores and his colleagues have had ongoing discussions with a number of non-profit organizations focused on similar reform and we support their efforts to address these important issues.”

In June, after the death of George Floyd, Gores released a statement supporting the Black Lives Matter movement:

The protests that have unfolded across our country over the last week and the senseless deaths of George Floyd, Ahmaud Arbery and Breonna Taylor shine a piercing light on issues of racism, police brutality and inequitable justice that continue to divide our country. As an organization, we condemn those things.

But words aren’t enough. The call to action is loud and clear and our organization is committed with a high sense of urgency to helping facilitate not only healing, but change.