Veteran Michigan Corrections Officer and Father of 4 Dies of Covid 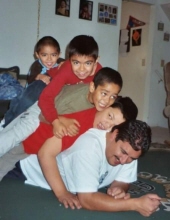 The 45-year-old father of four, Ramiro Jose Mata of Lansing, died Jan. 9, the Lansing State Journal reports. He was a single father to his 6-year-old daughter. His other three children lived with his ex-wife.

Family members assume Mata, a prison guard for 20 years, caught the virus at work, says a sister, Christina Moore. He was turned away from work Dec. 28 with a fever and a positive virus test result came back five days later, she added.

Michigan prisons report 22,345 confirmed cases since March, with 133 deaths. Another 657 cases and three deaths are classified as "probable" Covid links.

"If we could get people to understand to wear a mask, to take this seriously," said his other sister, Rosalinda Calley. "I would never want anyone to go through this pain."