The Gateway Pundit, a hard-right website, teased its bombshell before it was released Friday: A security-camera video, a SMOKING GUN in the all-caps style of the site, that would show "evidence of illicit and likely criminal activity" at the TCF Center on election night 2020. 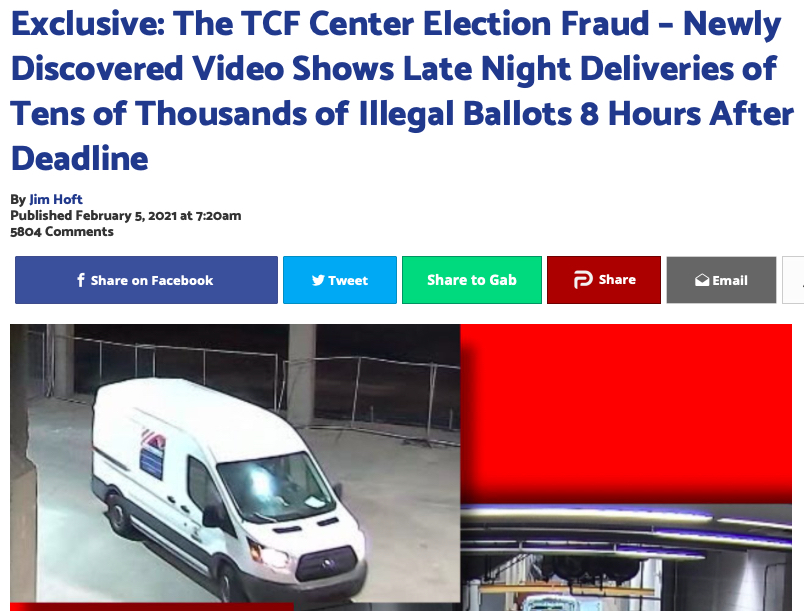 The claim: Thousands of ballots delivered illegally in the wee hours of the morning, which unfairly stole a landslide from President Trump.

The Freep looked into it. Sad trombone:

The video appears to show a white van at the TCF Center early in the morning on Nov. 4 containing ballots that were unloaded and brought into the counting room at the TCF Center. There is no evidence of anything nefarious.

The confusion -- or deliberate misleading of the Gateway Public readership -- appears to stem from confusion over Michigan election law. Absentee voters, like in-person voters, are permitted to cast ballots until 8 p.m. Election Day. It takes time to collect them from various drop boxes and polling sites, and more time for Board of Elections staff to verify signatures on the ballot envelopes, remove the ballots from those envelopes, and prepare them for scanning at absentee counting boards, which we all know by now were located in the TCF Center in November.

A sworn affidavit written by Christopher Thomas, the former Michigan Director of Elections who worked at the TCF Center, in response to a lawsuit against the city says that no late-arriving ballots were ever counted.

And so the Freep rates the Gateway Pundit claim to be false.