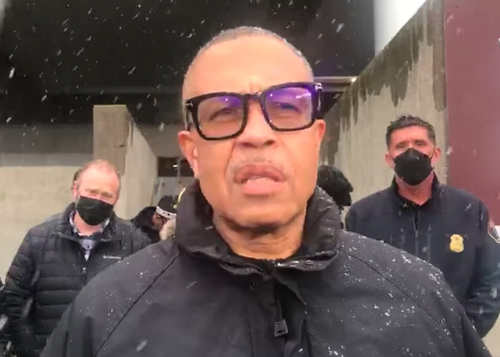 Detroit police announced the death of a man they shot and the injury of an officer Tuesday evening as much of the country celebrated "justice" for George Floyd, whose killer was found guilty of second-degree murder and other charges.

The man, whose name has not been released, was shot by police after stabbing himself and an officer who tried to intervene, Chief James Craig said at a news conference.

Craig said it was unclear whether the man died as a result of self-inflicted wounds or police gunfire. The officer was stabbed in the leg and then hit in the hand by friendly fire as officers aimed for the suspect, Craig said. He was hospitalized in stable condition.

The incident occured in the area of Eight Mile and I-75 around 4:30 p.m., minutes before ex-Minneapolis police officer Derek Chauvin was found guilty on all three counts against him, dispatch audio obtained by Deadline Detroit indicates.

The department does not plan to voluntarily release video of the incident, it told Deadline Detroit early Wednesday — even though it's swiftly released video footage in other instances where officers have shot and killed citizens, and did so just Monday in a separate case. Police spokeswoman Nicole Kirkwood did not provide a reason as to why this incident's footage would be withheld, saying that Craig makes the decisions on a case-by-case basis and she is not privy to his thought process.

Video may be made available via a Freedom of Information Act request, though those can take weeks and cost hundreds of dollars to process.

Scanner audio obtained by Deadline Detroit provides little in the way of clues as to what exactly happened, but does indicate police were called about a 32-year-old man high on an unknown drug on Hanna Street. A dispatcher said the man may have "ran out of house naked causing a disturbance with his girlfriend." It was also said he "lacerated himself" before the apparent altercation with police.

This is the second possibly deadly shooting by Detroit police this week. The first occurred early Monday after Craig said another man fired at officers for unknown reasons in the area of E. 8 Mile Rd. and Mohican.

Police released video they say shows he pointed gun at officers twice when they caught up with him. They say the guy had no criminal record and he may have been drinking and grieving the recent loss of a friend. pic.twitter.com/sXhRd9zwKd

Video released by the department in that incident appears to show the man was killed after pointing a gun at officers when they confronted him again following a pursuit. Craig said the man had no criminal history and may have been drunk and grieving the loss of a friend.

Both incidents are under investigation. Officer-involved fatalities are typically reviewed by a Detroit police task force supported by Michigan State Police. The officer in charge would be with MSP.