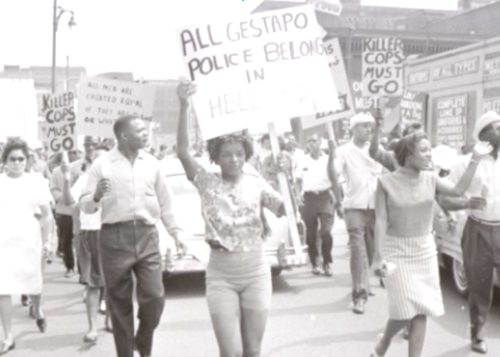 The author, a co-founder of Deadline Detroit, was a reporter, editor and columnist at the Detroit Free Press for 32 years.

An unprecedented research project by University of Michigan students into police violence in Detroit has documented dozens of shootings of unarmed Black men and routine cover-ups by prosecutors and department officials between 1957 and 1973.

While the scrutiny of “Detroit Under Fire” stops nearly five decades ago, the litany of incidents it uncovers depicts an unambiguous record of police abuse. It’s the most comprehensive accounting of fatal-force encounters for any U.S. city, project participants say.

The project, being unveiled this spring, is a major contribution to the historical context for nationwide Black Lives Matter protests that have been front-page news almost daily since the killing of George Floyd last May. Despite decades of supposed reforms, the project notes one fundamental connection between the era under study and the current crisis is the secretive internal processes under which law-enforcement agencies investigate themselves and cover their wrongdoing. 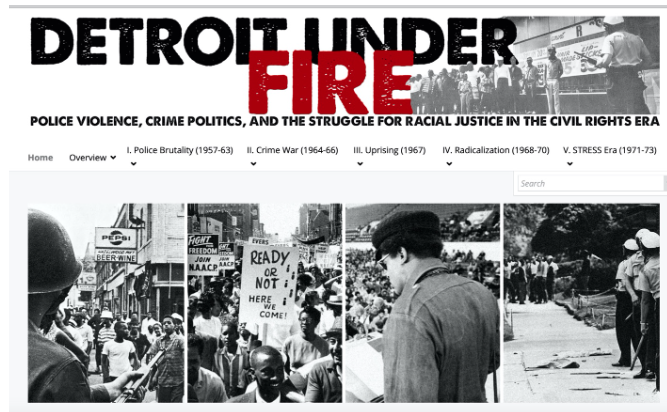 The project found Detroit’s most deadly era came between 1967 and 1973, when “more than a hundred unarmed people” were killed by Detroit law enforcement officers. The majority of the victim were young Black men allegedly fleeing property crimes or robberies, all declared justifiable homicides by Wayne County Prosecutor William Cahalan, writes Matt Lassiter, a U-M history professor who directed the project.

Describing the research in the current edition of The Boston Review, Lassiter explains that at the time, the Detroit Police Department’s firearms policy empowered officers to prevent the escape of “fleeing felons” with deadly force, basing that power in officers’ own “sound discretion.” That policy effectively provided what Lassiter calls a license to kill that was insulated from legal consequences.

“The degree to which the DPD availed themselves of this license to kill is astounding,” Lassiter writes.

“Detroit Under Fire” is a book-length multimedia exhibit consisting of stories, documents, photos, charts and interactive maps, filled with a staggering amount of information. The research lasted three years and was conducted by 22 students in U-M’s Policing & Social Justice HistoryLab, an initiative of the Department of History and the Carceral State Project. They consulted numerous archives, old newspaper reports and lawsuits while filing multiple freedom-of-information record requests. 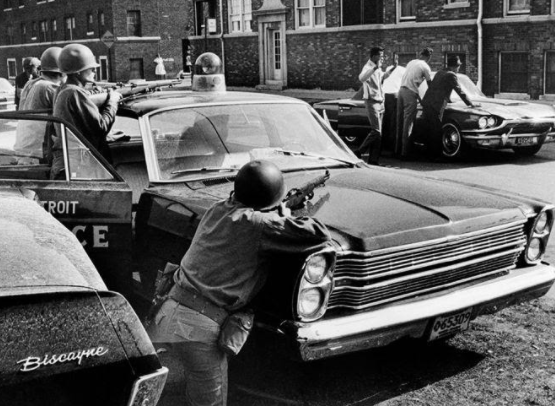 From 1957-73, researchers were able to identify and study 188 fatal shootings in Detroit -- 151 by the DPD, 18 by off-duty Detroit cops and 19 by other law enforcement agencies that worked in the city during the 1967 rebellion. They say the 188 shootings are nowhere near the actual total, but the real number is elusive largely because of secrecy on the part of the police and prosecutor’s office.

♦ Around 80 percent of police homicides during the civil rights era involved African American victims, even though as late as 1970 Black residents had grown to only 45 percent of the city population. In 1967, the DPD was only five percent Black.

♦ At least two-thirds of victims, and probably more, were of unarmed people who posed no direct threat to police or anyone else.

♦ The largest category of fatalities is of unarmed Black males shot in the back while allegedly fleeing the scene of low-level property crimes.

♦ A fifth of police homicides were of teenagers and preteens; almost all were African American, and more than 90 percent were unarmed

♦ At least 25% of police homicides either met the legal standard for bringing murder or manslaughter charges, or probably did, but involved cover-ups that should have been thoroughly and impartially investigated, in the project's assessment.

♦ The Wayne County Prosecutor declared all on-duty police homicides to be "justifiable" except for five. Three resulted in murder prosecutions, but each charged officer was acquitted.

♦ The DPD routinely covered up the circumstances of police homicides, and the Wayne County Prosecutor routinely whitewashed investigations.

With the project’s extensive mapping, the geographic reality of the police homicides stands out. Shootings of civilians escalated during the rebellion year of 1967 and afterward, partly, the researchers determined, because of a political response to the expansion of the African-American population into white neighborhoods. The DPD, the U-M students report, attempted to maintain the color line through harassment of African American pedestrians and motorists when they traveled downtown or beyond defined Black areas.

In the 1950s, more than a third of all non-traffic arrests were illegal “investigative” detentions without probable cause, allegedly of crime “suspects” and primarily of Black residents.

The project pays abundant attention to the citizen response to police violence, especially by African-Americans. The starting date of 1957 was chosen because that’s when the local NAACP chapter ramped up a campaign against police brutality that included a demand for a civilian review board. In 1973, Detroiters elected Young the city’s first black mayor after he ran on a platform of police reform. 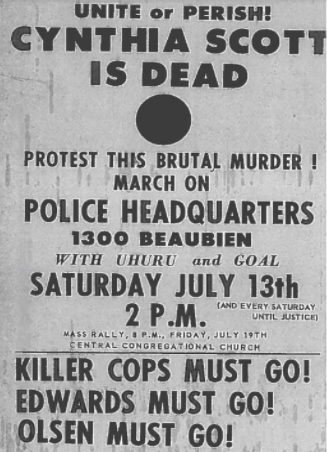 The project observes how radical Black organizations moved to the forefront of the anti-police brutality movement in 1963, after a white officer shot and killed Cynthia Scott, a 24-year-old Black woman, as she walked away after refusing to submit to what the project labels as an “illegal arrest.”

The prosecutor and the police commissioner -- the liberal George Edwards -- exonerated the officer, who fabricated a story that Scott attacked him and his partner with a knife. After examining internal documents, the project concluded the DPD and prosecutor’s office engaged in a cover-up of Scott’s death.

Between 1971 and 1973, the DPD killed at least 108 people, which the project says is a higher number of civilians per capita than any other city in the country. Non-fatal shootings of civilians by police also escalated during the early 1970s, when gunfire by DPD officers wounded an estimated 250-300 people, according to “Detroit Under Fire.”

At least 19 of the killings of that era were connected to the infamous STRESS (Stop the Robberies, Enjoy Safe Streets) squad, the undercover decoy unit instituted under Mayor Roman Gribbs, a former Wayne County Sheriff.  Excesses by STRESS led to a broad-based movement against police violence, but the project notes STRESS was only the most prominent aspect of the DPD’s “proactive policing” and racially targeted crackdowns of that time.

Deaths of police officers are well documented by the departments themselves and other websites; 42 members of the DPD died in the line of duty between 1957 and 1973, plus five more in 1974, the deadliest year for homicides in Detroit, with 714.

By contrast, the researchers emphasize that the precise number of people killed by Detroit police is “unknown and ultimately unknowable,” partly because of the secrecy that surrounds internal records of shootings.

“Making the content of these archives, including closed state archives, available to the general public is essential to proving continuities in how and why the police deploy racialized violence and then evade accountability,” Lassiter writes in The Boston Review. “Having a full account of how the state has historically devised ways of excusing its own violence against Black people is a crucial step in demanding accountability and change.”