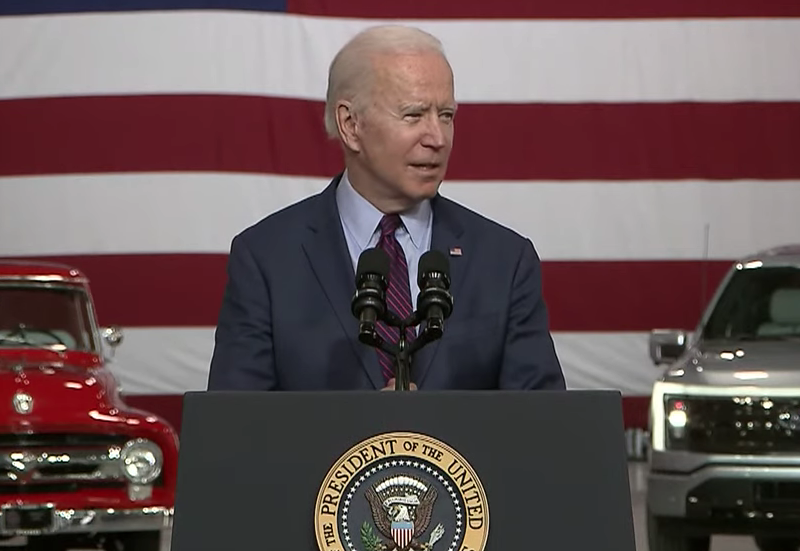 President Joe Biden visited Ford Motor Co.'s electric vehicle plant in Dearborn Tuesday to promote and highlight a new pickup truck and talk about infrastructure. But some of his remarks were in praise and promotion of  Michigan Democratic politicians.

Most notably, he singled out Gov. Gretchen Whitmer, who is dealing with political fallout over her Florida trip in March, and Rep. Rashida Tlaib, who has been critical of Biden's response to the Israeli-Palestinian conflict.

"You've got a backbone like a ramrod," Biden said of Whitmer at the outset of his speech, which focused on electric cars and jobs. "You've got a brain as big as anybody in the business. And you're so honorable. It's a delight to know you. As I've said to you before, I'll come campaign for you or against you, whatever will help you the most."

Whitmer, who is up for re-election next year, has come under media scrutiny for her trip to Florida in March to visit her father and how the private jet was paid for.

Biden talked about the future of cars and competing in the global market.

"Look, the future of the auto industry is electric. There's no turning back," he said, adding "the only question is whether we'll lead the race or fall behind."

He also praised other local Democrats, including Tlaib, who has been critical of Biden for not being tougher on Israel and Prime Minister Benjamin Netanyahu during the latest conflict. Tlaib, who spoke privately for about eight minutes with the president before his speech, has a grandmother and other relatives in the West Bank, which has seen far less violence during this latest conflict than Gaza.

"I'll tell you what, Rashida," Biden said. "I want to say to you, I admire your intellect, I admire your passion, and I admire your concern for so many other people. And from my heart, I pray that your grandma and family are well. I promise that I'm going to do everything to see that they are -- in the West Bank. You're a fighter, and God thank you for being a fighter."

Biden has expressed support for Israel's right to respond to Hamas' rockets, but has come under increasingly intense pressure to push for a cease fire.

On Monday, Tlaib said on MSNBC: "Enough, President Biden. You will not do this on our watch. You have to speak out against this violence in a very aggressive way that holds Netanyahu and his leadership accountable."