The art was supposed to be a pro-police mural in Sterling Heights. One of the Detroit Institute of Arts' Partners in Public Art projects, the years-in-the-making tribute was unveiled to positive reception at the suburban department last week.

But when its social media debut prompted backlash and accusations of racism, the art became the drama itself — the latest installment in a series that, à la a 2020 New York Times headline, we'll call, "Has the Detroit Institute of Arts Lost Touch With Its Home Town?"

The unveiling of the mural coincides with a nationwide movement to overhaul policing as we know it, what with its propensity toward racist and unjustifiably violent encounters.

But local dynamics exacerbate what critics see as the already tone-deaf nature of the work: The Sterling Heights department was sued last year for racial bias, and just a few months ago an officer made an abhorrently racist remark about the murder of George Floyd, posting a picture of ex-officer Derek Chauvin kneeling on his neck with the caption "when you gotta change a tire but don't wanna get your trousers dirty." The officer has since resigned.

Add to that the fact the DIA's home is the majority-Black central city and its director, Salvator Salort-Pons has been under increasing pressure to resign following a review that found he lacks sufficient knowledge of race and diversity issues — and you've got yourself quite a conceptual piece.

Plus, there's the millage voters recently re-upped, leaving some with the impression that an institution they support for cultural purposes is now steering their tax dollars toward police propaganda.

"The leadership of @diadetroit continues to demonstrate that they are unable to lead our institution and serve the diverse communities of Detroit," DIA Staff Action, a group of current and former staffers whose criticism of the museum's workplace culture sparked the review of Salort-Pons, said of the mural on Instagram. "We are disappointed but not surprised."

But the tri-county millage is reason itself for the work, the museum said in a statement. Because it's supported by the region, the DIA says it's contractually obliged to set aside funding for suburban projects that "respect and sustain the mission of the local organization and preserve the local character of each program.” There are a handful of such installations across Macomb County, including at Eastpointe’s children’s garden and Warren's recreation center.

Sterling Heights asked for a police mural to inaugurate its expanded police station, in "a wonderful example of what happens when you combine artistic vision with community input,” Charles Garling, director of studio programs at the DIA, told the Macomb Daily last week.

"A broad and diverse region supports the DIA with millage funds, providing more than two-thirds of our operating budget," a museum spokeswoman said in a Monday statement to Deadline Detroit. "As a consequence, individual communities will have priorities that differ greatly from others.

"Since 2018, the year this mural was painted, much has transpired in our country and we understand and respect that many members of our community are hurt and angered. To support healing, we will continue investing in partnerships with community-based non-profits in the tri-county region led by and serving the BIPOC community."

The "To Serve and Protect" mural aims to capture Sterling Heights' "spirit of service, honor and fraternity," Garling said. It's a collaboration between the museum's Vito Valdez, a Mexican-American Detroit-based artist leading the DIA's public arts projects; Nicole MacDonald, a white Detroit-based artist whose work has celebrated Black figures in the city's history; and Sterling Heights officers and their families.

MacDonald produced the mural, while the police contributors worked with Valdez to create a series of tiles underneath. One of those tiles is an apparent depiction of the skull logo worn by violent vigilante Marvel character The Punisher, an image that has been co-opted by some police, military personnel and white supremacists. It is done in the style of the "Thin Blue Line," a pro-law enforcement motif that has also come to represent opposition to the racial justice movement. 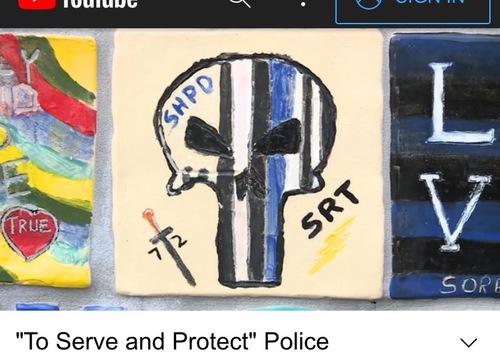 Though MacDonald participated in last week's ribbon-cutting and said she enjoyed working on the piece with officers, she now says she regrets getting involved and will petition for the mural's removal. Initially, she says she thought she'd been enlisted only to provide support on the project, but when she became the lead artist tried "to make the best of a bad assignment" by depicting police as peaceful rather than aggressive. The mural shows a group of officers, with a woman front and center, holding hands with their heads bowed in a posture intended to denote introspection. She says she was later encouraged to add an American flag in the background.

"I consider myself a socialist, against police brutality, pro-police reform, and completely in line with the tenants of (protest group) Detroit Will Breathe," MacDonald said in a statement. "I feel completely sick about this and feel like I was used. The museum needs to be working with groups that are disenfranchised and in our city."

A swarm of online criticism this weekend prompted the DIA to scrub some promotional posts about the mural. On Sunday, it wrote on Twitter and Instagram that it had deleted a set of Friday posts due to the "personal nature and tone of comments." Its earlier Instagram post had drawn nearly 200 negative remarks by the time we saw it Saturday, many calling police "pigs" and the museum tone-deaf.

Then, when critics swarmed the Sunday post to complain the museum was now also inappropriately policing debate over its works, the DIA took that post down too. One commenter asked when they could expect to see a mural of the McDonald's Hamburglar over the Diego Rivera frescoes pictured.

The museum said it deleted the posts not to silence dissent, but to protect those being attacked in the comments.