CBS Detroit booted meteorologist April Moss for public criticism of parent company ViacomCBS during a Sunday night newscast and online, as she expected.

"Ms. Moss is no longer with our station," it says in a statement posted Tuesday by Newsweek and other media.

"April Moss objected to WWJ-TV's policies regarding Covid-19 testing and wearing masks inside our station, which are based on CDC, state and local guidelines. Any suggestion that she was in any way a victim of 'discrimination' due to her concerns about these policies is completely false. In fact, we allowed April to perform her weather anchor duties from home as we explored her concerns.

"While we respect and support our employees' freedom to have their own opinions, they are not entitled to use our station news broadcasts as a platform for sharing personal views." 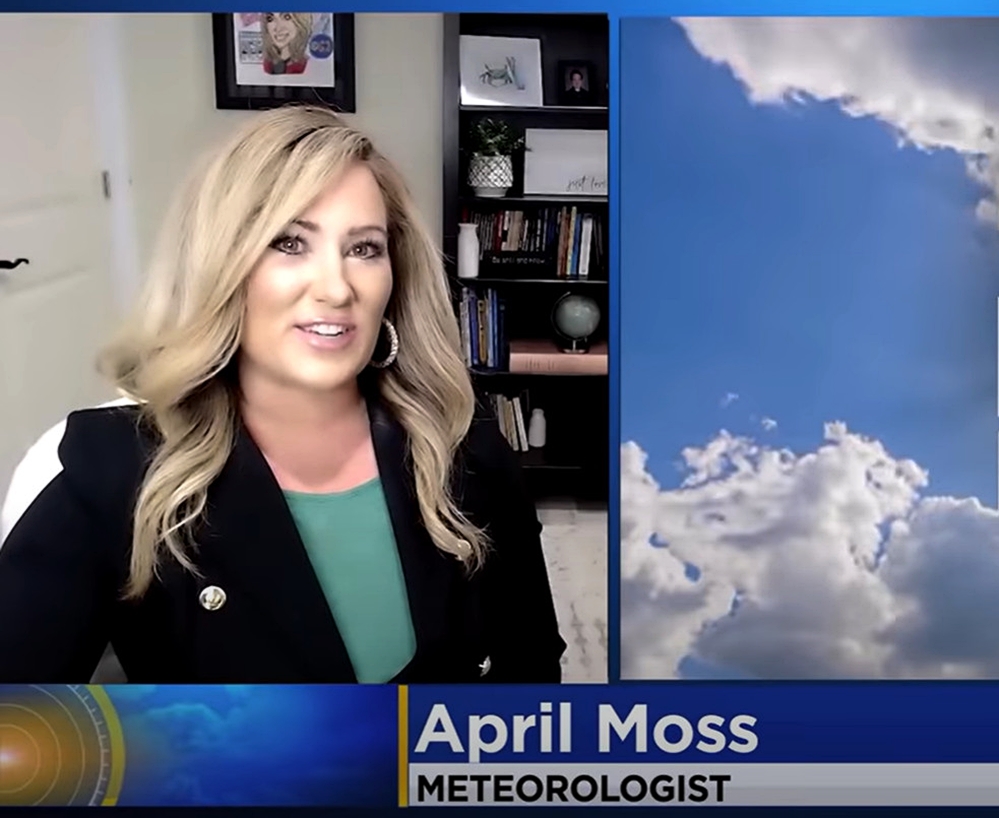 The 38-year-old weathercaster, who had been at the station more than nine years, went rogue on Fathers Day on live TV (video below) and posts at a new fundraising page:

I felt led to stand up to the medical discrimination that was being enforced by ViacomCBS on its employees. The mandate for any individual to be tested for COVID19 for employment or participation at a university or other institution violates federal law.

My hope is that others who are faced with similar situations in their workplace can find the strength and courage to stand up for their God given rights. Thank you so much for contributing to myself and my family. God Bless You!

In a 21-minute video with conservative activist James O'Keefe of Project Veritas, posted Tuesday, she calls her stance "a human rights issue" and accuses her ex-employer of using the "power of all of [the] ViacomCBS brand" to legitimize the Covid-19 vaccine."

She graduated from Central Michigan University in 2005 and joined the CBS affailiate in April 2012.

A WWJ-TV weather lady is following, robotlike, in the footsteps of a forecaster who went viral last week for promising to dish dirt on her employer before proceeding to dutifully tell viewers if they could expect rain.

Both women teased leaks to be released by far-right activist group Project Veritas. Houston meteorologist Ivory Hecker was fired after accusing KRIV station parent FoxCorp of "muzzling me to keep certain information from you, the viewers.”

April Moss, of WWJ (Detroit CBS 62), said Sunday that she would "be sitting down this week with Project Veritas to discuss the discrimination that CBS is enforcing upon its employees."

Hecker's drop was generally unimpressive, the Daily Beast reported in a post headlined, "Wait, This Is Why a Local Fox Reporter Sabotaged Her Career?" and subheadlined, "Womp, womp":

The 10-minute video featured Hecker sitting down with (Project Veritas' James O’Keefe) to allege that Fox 26 management purposely steered her away from legitimate news stories in order to support a specific agenda handed down from corporate headquarters.

In one piece of surreptitiously recorded footage, Fox 26 assistant news director Lee Meier was seen explaining why the station does not do more stories on Bitcoin. In the clip, Meier said it’s “an editorial choice” to not cover the cryptocurrency because it likely would not appeal to the station’s early-evening broadcast viewership.

“I have passed on Bitcoin stories by almost every single reporter for our five o’clock audience, because that’s not our five o’clock audience,” Meier stated. “So, there are lots of reasons. If I know our numbers are tanking from five to six and in one particular segment… I may say, yeah, and Bitcoin for poor African-American audience at five, it’s probably not going to play. That’s a choice I’m making.”

We're still waiting to learn what Moss, who is white and blonde, believes constitutes discrimination at the station. WWJ-TV did not immediately provide the status of her employment when reached Monday by AdWeek.