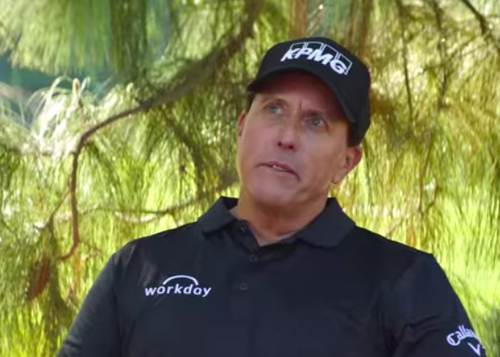 Phil Mickelson has soured on Detroit after a local reporter welcomed him to town for the PGA Tour with a story indicating the star golfer was once cheated out of $500,000 by a mob-connected bookie from Grosse Pointe.

Took place 23 years ago. Had I not come here to Detroit it wouldn’t have run.
My mistake making the effort to be here and have my foundation look into ways to help the local community. Didn’t even think of the opportunistic Rob Snells in the area would try and take advantage

Mickelson and his attorney questioned its merits, with the 51-year-old golfer tweeting the rather petulant response above.

He later confirmed he would not be coming back to the Rocket Mortgage Classic, the Free Press reports:

The reigning PGA champion ... said he did not feel appreciated for arranging his busy tournament schedule in order to play in Detroit, which marked his first tournament in Michigan since the 2008 PGA Championship at Oakland Hills.

“It was so much effort for me to be here and to have that type of unnecessary attack,” he said. “Not like I care. It happened liked twentysomething years ago. But it’s just the lack of appreciation.

Mickelson added that, otherwise, the people of Detroit had "been great."

Lawyer Gary Cohen meanwhile told ESPN "the only purpose for this article is to embarrass Phil Mickelson.''

"[Snell] didn't say anything [in the story] that wasn't true; I'm not complaining about that," said Cohen. "But why? Why are you going to embarrass Phil Mickelson when he's there to support your tournament and the charities it supports and the [PGA] Tour? Rocket Mortgage is a Detroit-based company. Phil has never played there before."

The part that both Mickelson and his lawyer seem to miss is that while the Detroit News may have offices in a building owned by Dan Gilbert, the paper does not work for him, nor any events his companies sponsor. The Detroit News is also not an ambassador for the city.

Regardless, we're not sure why Mickelson is so bothered in the first place. Half-a-million dollars is chump change for a guy whose net worth is said to be $400 million, and hardly (we think) indicative of a problem. That's like if the average American went and spent $865 at the casino. (Just trust the math.)

Update: Mickelson actually appears to be quite the gambler. ESPN — the outlet his lawyer complained to this week — in 2017 reported he owed another big bookie nearly $2 million in 2012. Here's hoping Mickelson didn't hold the editorial decision against Bristol, Conn.