"We don't really get talked about," says a co-curator whose show spreads awareness of local Japanese-Americans. Seven more scenes are below. (Photos: Gary North/Detroit Historical Society)

An 11-week exhibit that opened Saturday at the Detroit Historical Museum explores a group that "is rarely discussed and sometimes not quite felt," according to description of "Exiled to Motown: A History of Japanese Americans in Detroit."

The display, billed as a "multimedia walk through history," has photos, fashions, documents and other keepsakes loaned by local families, as well as oral history interviews. 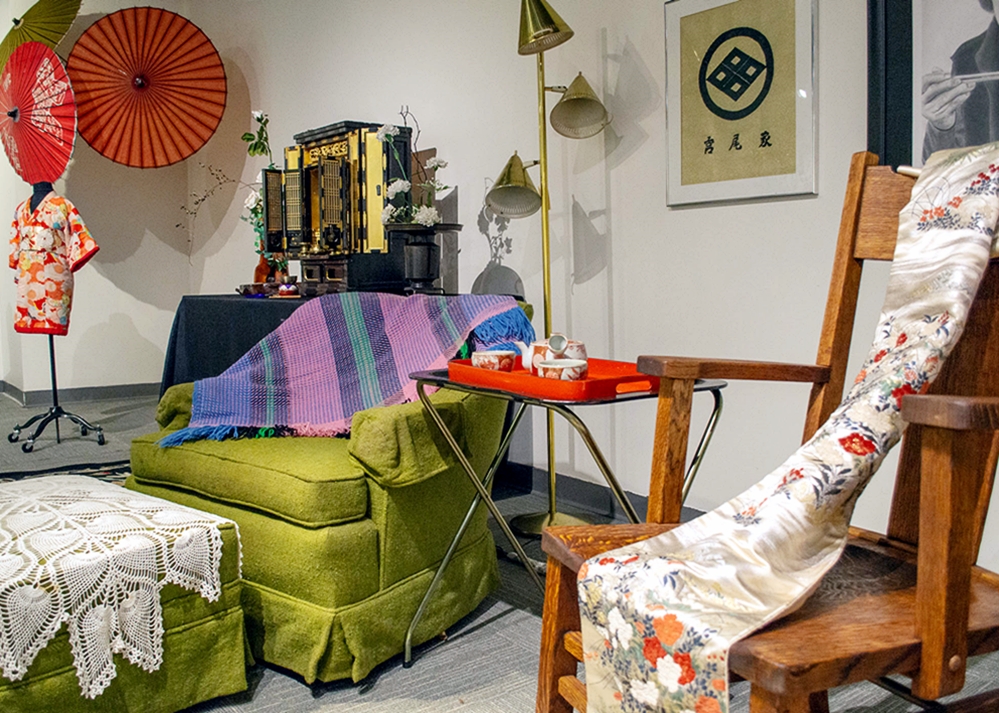 The first word in its title refers to the era after forced internment of about 120,000 Japanese Americans in 10 western U.S. military prison camps from 1942-45 during World War II. When a unanimous Supreme Court decision said the camps were illegal, "some Japanese Americans sought to begin life anew in cities far from home, like Detroit," the museum posts.

There was a dark side to these Rust Belt refuges, however: The U.S. government felt that Japanese Americans would pose no threat to American society -- and perhaps even assimilate completely -- if they were scattered across the Midwest in numbers smaller than in the booming Japantowns of Seattle or California.

Starting a new life in Detroit was supposed to mean starting life without a Japanese American community, and leaving that culture behind forever.

Naturally, that couldn't hapen and didn't.

The Community Gallery presentation "highlights the cultural life of Japanese Americans in Michigan from 1946 to the present," says a website created by the Detroit chapter of the Japanese American Citizens League (JACL), which produced the exhibit with support from its national organization and the Japan Business Society of Detroit. (See five more photos at the end of this post.)

The project began expanding in 2018 from a series of oral histories compiled in a 300-page book, Exiled to Motown (2015). Small previews of the exhibit were shown in 2019 in a University of Michigan classroom, libraries in Ann Arbor and Novi, at the Japanese Consulate in Detroit and at JACL's national convention in Salt Lake City. 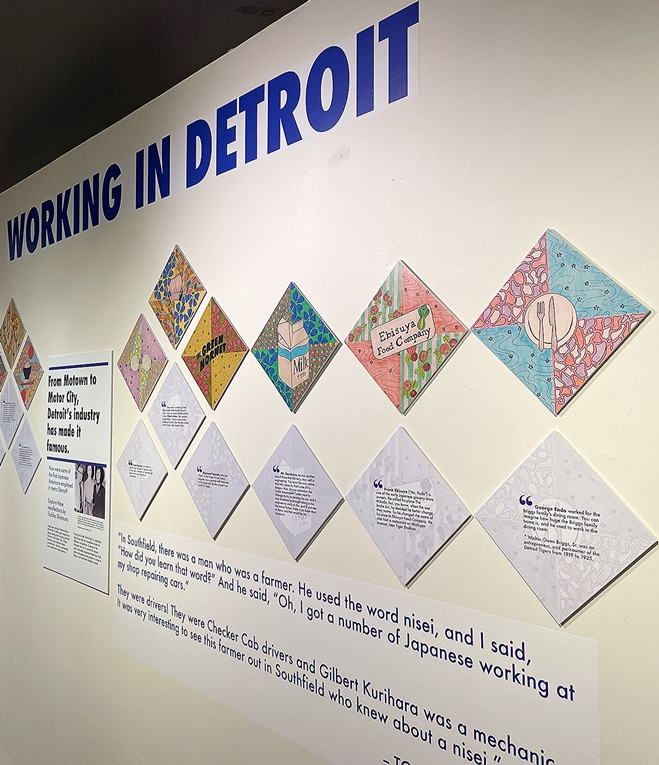 Mika Kennedy, curator of the exhibit with Celeste Shimoura Goedert, frames its intent poignantly in a blog post Thursday. An excerpt:

There’s probably a lot of people in Michigan – to say nothing of the United States, or the world – that have no idea Detroit has, or ever had, a Japanese American history at all. ... We don’t really get talked about.

"Exiled to Motown" is not an exhibit that seeks to prove Japanese Americans exist – or even to prove we exist in the Rust Belt. Rather, through this exhibit we hope to explore how our community has persisted, at the level of memory, of moment.

We hope to linger over small things, like picnic days and bowling leagues, to get at the big ones: Detroit’s role in brokering relationships between Japanese Americans and other Midwesterners, as well as Japan and the United States. The development of a pan-Asian solidarity. The solidarities we owe our black and brown neighbors, our immigrant neighbors, our asylum seekers, and our indigenous hosts.

The display "also examines the lived realities that are not always so celebratory –the effects of racial segregation and racial prejudice that affect everyone living in a community, past and present," says the website's description.

Kennedy, who has master's and doctorate degrees from the University of Michigan, is a visiting assistant professoir of English at Kalamazoo College. She has been on JACL's Detroit chaptrer board since 2016.

Her fellow curator and exhibit writer-designer, Celeste Shimoura Goedert of Ferndale, graduated from U-M in 2017 and worked at the Detroit Institute of Arts from mid-2018 until last April. She's now an operation and program staff member at Rising Voices, a Detroit-based nonprofit working to increase civic participation by Asian Americans in Michigan.

Gallery from museum and sponsor:

This exhbition view and the next two are by Gary North of the Detroit Historical Society. 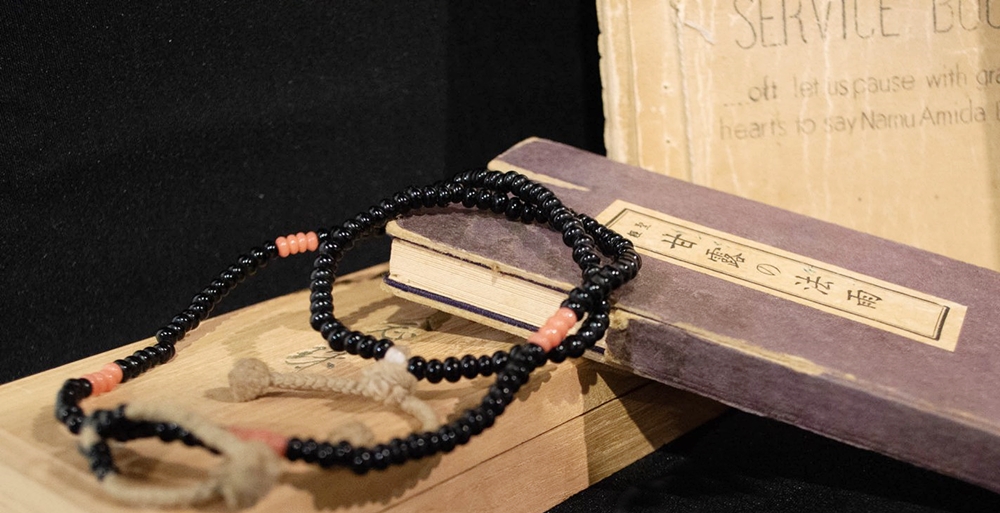 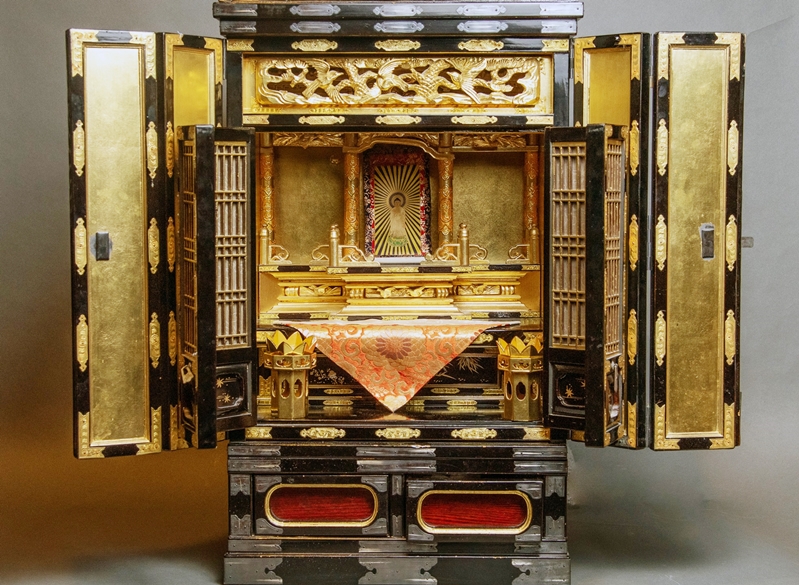 A Butsudan altar is loaned by JACL board member Mary Kamidoi, a 91-year-old Westland resident. whose mother brought it from Japan. It's a Buddhist shrine often seen in temples and homes. 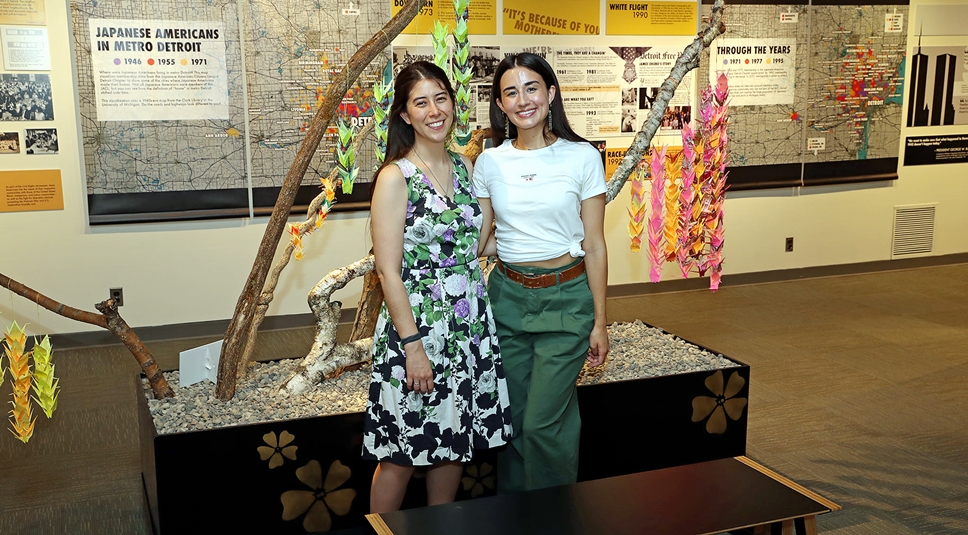