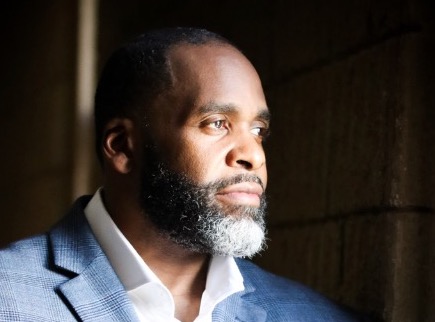 Bishop J. Drew Sheard will officiate at the wedding at the Little Rock Baptist Church on Woodward in Detroit, where Kilpatrick, 51, delivered a sermon June 13.

McGee started working as a receptionist in the mayor's office in 2002 at age 20 while Kipatrick was mayor. He tells Deadline Detroit he may have spoken to her once or twice, but had no relationship at the time.

She stayed at city hall until 2004 and now runs a Detroit nonprofit focused on girls and women.

In 2018, while in prison, a friend reached out and said there was a woman who was into the church and wanted to give him a message of encouragement, Kilpatrick explained.

"I was mad about being in prison. I wasn't looking for a relationship," he said. A couple months later, he found her number while cleaning up his cell and called.

"We started a conversation and started praying together," he said. "Neither one of us was looking for a relationship at the time." He said that allowed them to "be brutality honest" with one another.

In 2019, he said she started visiting him in prison, but "she was just being a friend." He said a true relationship began forming.

"I learned you can actually build a relationship by being truthful and honest," he said. "She was great at forcing me to be myself."

He said he has found his true love, "my dream girl."

They don't plan to live in Michigan, he said, but didn't specify beyond that.

Kilpatrick was sentenced in 2013 to 28 years in prison after being convicted of 24 felony counts, including mail fraud, wire fraud and racketeering. In January, in his final hours as president, Donald Trump commuted his sentence to time served.

In an interview with Deadline Detroit in June, he said he planned to avoid a comeback in politics and instead go into the ministry.

"I know that's what I'm supposed to be doing," he said of his religious path, which will include attending theological seminary school in the fall.  "I can't imagine doing anything else for the rest of my life."

He originally planned to go to Columbia University in New York, but now says he'll go to divinity school in the South.

Kilpatrick, who has three grown children, was divorced from his wife Carlita in 2018 while he was in prison.