Steve Hood's funeral is next Saturday, outside in Detroit 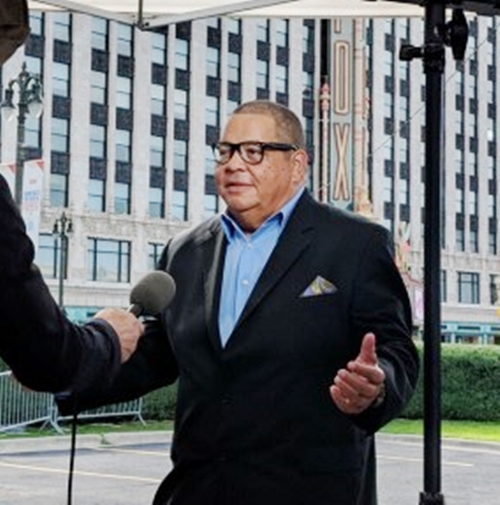 The funeral for Steve Hood, a Detroit broadcaster and political consultant, is next Saturday, Aug. 28, at 11 a.m. at Plymouth United Church of Christ, 600 E. Warren Ave. at St. Antoine St. in Detroit. It will be outdoors, under a tent.

Steve attended nursery school and kindergarten at Peoples Community Church in Detroit. While at Peoples he held the distinction of being the only child disciplined for mooning the other students from the top of the slide.

Steve attended Roeper City and Country School from first grade until 8th Grade. It was at Roeper where he perfected his “Cannon-Ball.” In 8th Grade, Steve along with two cohorts masterminded a plan to fail the entrance exam to Cass Technical High school to thwart their parents’ wishes for them to attend the prestigious school. The parents caught wind of the plot and forced the three to retake the entrance exam. All three passed the test and matriculated to Cass Tech.

In his Senior Year of Cass Tech Steve and friend Claudia Triplet disagreed with the destination of the Cass Tech Senior Class Trip. Steve and Claudia sponsored a trip to Disney World for 80 of their friends. A great time was had by all.

Steve attended Emory University and graduated in 1985 with a degree in Biology. It was at Emory where Steve honed his critical thinking skills.

Following college, Steve returned to Detroit to work with his father at Cyprian Center. Together they built a network of barrier free homes for the Developmentally Disabled that stretched from Taylor Michigan to Northwest Detroit.

In 1994 Steve set off on his own and created one of the first Geographic Information Services Based Election Data Systems. This system which  still operates today enabled Steve to assist over 160 Candidates in winning their elections.

From 2003 until 2009 Steve worked for the Department of Management and Budget at Wayne County where he served as then Director of Vendor Services. In that position Steve excelled in expanding contracting opportunities for African American Owned Firms.

Steve Hood’s most important and legacy is on the youth of Detroit. For 20 Years Steve served as the High School Sunday School Teacher at Plymouth United Church of Christ. Over that time Steve taught 50 Weeks per year and took the Students on the Annual HBCU Tour. 8 Years ago an alternate Black & Ivy Tour was created as a way to expose students to the Ivy League Schools. Steve’s students have gone on to become solid citizens. Steve’s motto is “ Saving Detroit One Sunday School Lesson at a Time”.