Bad-faith actions have consequences for Sidney Powell, a former campaign lawyer for Donald Trump, and eight other attorneys who sued in Michigan in a bizarre effort to overturn Joe Biden's election victory.

A federal judge in Detroit imposed professional penalties Wednesday, saying those lawyers should have examined the former president's voter fraud claims more carefully. "This lawsuit should never have been filed," writes Judge Linda Parker in her 110-page opinion, criticizing "a historic and profound abuse of the judicial process."

The attorneys -- including two Metro Detroiters -- must pay the defendants' legal fees and attend at least 12 hours of legal education on lawsuit affidavit standards and election law. Parker also will notify state disciplinary boards where they're licensed to suggest "investigation and possible suspension or disbarment."

Michigan state leaders, the city of Detroit and Michigan voter Robert Davis had asked the court to sanction the attorneys over their "frivolous" suit.

The local attorneys sanctioned are Gregory Rohl of Novi and Stefanie Junttila of Detroit. The only other Michiganian is Scott Hagerstrom of East Lansing.

NBC News, which calls it "a blistering 110-page ruling," quotes this part:

"This lawsuit represents a historic and profound abuse of the judicial process. It is one thing to take on the charge of vindicating rights associated with an allegedly fraudulent election. It is another to take on the charge of deceiving a federal court and the American people into believing that rights were infringed, without regard to whether any laws or rights were in fact violated. This is what happened here."

The judge said Powell and her co-counsel in the case "have scorned their oath, flouted the rules, and attempted to undermine the integrity of the judiciary along the way."

Parker dismissed the Michigan lawsuit last December, saying in a written decision that Powell's voter fraud claims were "nothing but speculation and conjecture" and that, in any event, the Texas lawyer waited too long to file her lawsuit.

Powell did not immediately respond to a request for comment.

Parker signaled her sentiments during six hours of argument in July. "I don't think I’ve ever seen an affidavit that makes so many leaps," she said at one point. "This is really fantastical. So my question to counsel here is: How could any of you as officers of the court present this affidavit?" 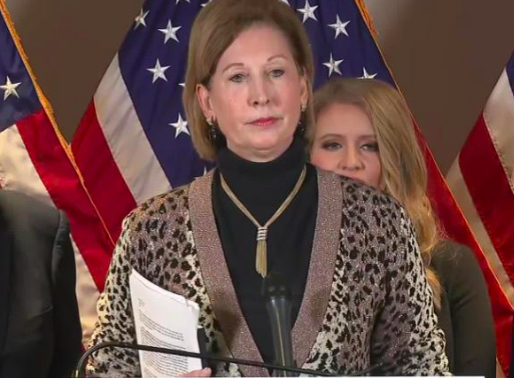 Powell, a Dallas lawyer who worked closely with Rudy Giuliani to challenge the presidential election around the country, and was a key attorney behind the Michigan lawsuit. (Giuliani's law license in New York was suspended this summer.)

The case is one of dozens filed by the Trump campaign and its allies. Powell said the tactic would "release the Kraken," a fanciful reference to the 1981 film "The Clash of the Titans."

Gov. Gretchen Whitmer issued a statement, saying the judge's action amounted to a victory for democracy.

"After the 2020 election where Americans voted in record numbers, the outgoing president, his allies, and his enablers pushed the Big Lie—that the election was stolen, that our system didn’t work, that American democracy was fraudulent."

"While the mob on January 6th physically assaulted our democracy, Sidney Powell and other lawyers continued to do so in our courts. They launched dozens of lawsuits, exploiting the legal system to undermine a free and fair election. The courts rejected all of them."