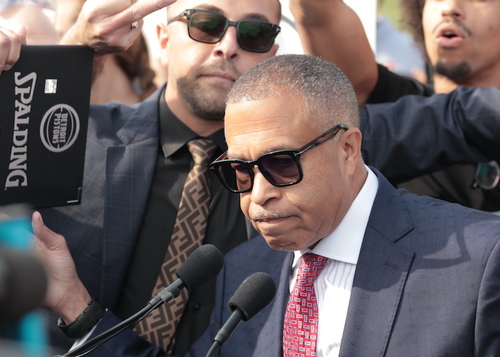 Talk about a misfire: Former Detroit Police Chief James Craig's long-promised official entry into the Michigan gubernatorial race ended in embarrassment Tuesday as protesters from Detroit Will Breathe cut short and drowned out his speech.

Craig fled in a vehicle after appearing briefly behind the podium. Someone holding a WXYZ microphone to Craig's face managed to capture his shouted declaration that he's running for governor.

James Craig was surrounded by protestors on Belle Isle this morning when he made a quick announcement. "I'm running for governor of the State of Michigan." pic.twitter.com/8EeyawwAzx

Craig later gave his speech from a breezy rooftop patio near the riverfront. He also used the earlier heckling as a fund-raising pitch, tweeting that "leftist protestors stormed the podium. ... We need to move hard and fast - which is why we're asking you to donate today to help us send Governor Whitmer a message!"

Craig blamed a combination of "paid protesters" and the state DNR, which is responsible for the park, for the bungled event. The DNR, he told the Detroit News, failed to take steps to protect him, knowing "the group had the potential to become violent."

The Michigan DNR says the campaign understood there would be no security at the event and "affirmed they understood" that crowd control would be their responsibility. A spokesperson with the state department said a park ranger and law enforcement officers were dispatched "as soon as we were made aware of the issue" Tuesday.

However, there may have been a miscommunication, because when it was made aware of the planned protest a day earlier, an official with the agency said “we will not have crowd control but our staff knows the rules and they will not be allowed on your reservation site,” correspondence obtained by Deadline Detroit shows.

The Michigan DNR, which runs Belle Isle, says Craig campaign did not ask for security and "affirmed they understood crowd control would be the responsibility of the campaign." Craig has blamed the DNR and "paid protesters" — who say they're unpaid — for the bungling. From DNR: pic.twitter.com/QShP9HgXtg

The kickoff was one of three stops planned for today, with others in Flint and Grand Rapids. Flint's had to be rescheduled due to the hiccup.

The Detroit event was set for Sunset Point at Belle Isle, a state park, and protesters were free to press close to the candidate, chanting and blowing air horns.

Video of Craig's later speech is below. The audio is poor, because it appears no PA system was in use at the contingency location.