James Craig comes out as 'unapologetically pro-life' amid abortion uncertainty 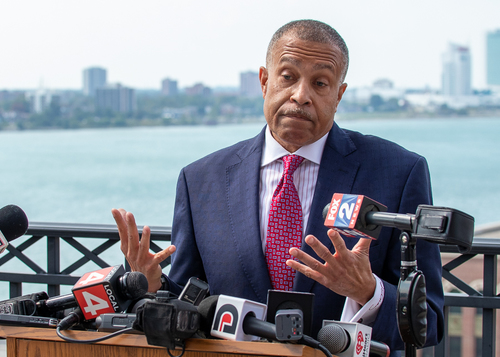 Three months ago, when James Craig was still just a Republican gubernatorial prospect with little ambition beyond being tough on crime, he said he was still getting tight on political issues he'd never "really been involved with but would be asked about," including abortion.

We thought it strange that a father in his mid-60s who'd been married four times couldn't say where he landed. But we have a sense of where he's at now as a candidate: Pro-life, and possibly so far right that he won't allow an exemption for victims of rape and incest. He's thinking about it.

That revelation came in an interview last week with Tim Skubick, who pressed him because the group Right to Life will only endorse candidates who oppose abortion under all circimstances.

This week, Metro Times reports he promised a crowd of Yoopers that abortion will be illegal in Michigan should he be elected governor and the U.S. Supreme Court overturn Roe v. Wade. Michigan has a state-level abortion ban that is for now effectively moot due to the 1973 federal ruling; Craig said he would prevent any attempts by state Democrats to repeal it.

Democrats, including Gov. Gretchen Whitmer, have reportedly called on lawmakers to repeal the ban with the conservative majority on the high court already chiseling away at abortion protections. In February, state Sen. Erika Geiss, D-Taylor, introduced such a bill.

In a statement, the Craig campaign stood by his promise.

Though Craig said he had yet to come to a decision on an exemption in cases of rape or incest, thinking outloud to Skubick, he said “Certainly the crime of rape is a despicable crime, and maybe that’s a situation where if [abortion] is what the mother wants the choice, the freedom to then have an abortion because she was raped or because of incest, maybe that is the right direction?”

We look foward to seeing how he reconciles those feelings with what's politically advantageous in a primary election.