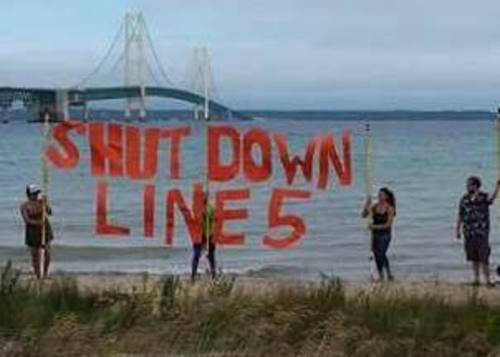 The energy company behind Michigan’s controversial Line 5 paid police departments in Minnesota to surveil and arrest protesters opposing a separate pipeline there, an unusual move critics call a "clear violation of the public's trust" that perverts incentives.

According to documents obtained by The Guardian, the Canadian gas distribution company reimbursed law enforcement agencies $2.4 million after they arrested and pursued protesters against the replacement of Line 3.

The relationship between the private company and public police departments stems from a decision by the Minnesota Public Utilities Commission:

It’s common for protesters opposing pipeline construction to face private security hired by companies, as they did during demonstrations against the Dakota Access pipeline. But in Minnesota, a financial agreement with a foreign company has given public police forces an incentive to arrest demonstrators.

The Minnesota Public Utilities Commission, which regulates pipelines, decided rural police should not have to pay for increased strain from Line 3 protests. As a condition of granting Line 3 permits, the commission required Enbridge to set up an escrow account to reimburse police for responding to demonstrations.

Enbridge told the Guardian an independent account manager allocates the funds, and police decide when protesters are breaking the law. But records obtained by the Guardian show the company meets daily with police to discuss intelligence gathering and patrols. And when Enbridge wants protesters removed, it calls police or sends letters.

Opponents of Line 3 blast the move:

“Our police are beholden to a foreign company,” Tara Houska, founder of the Indigenous frontline group Giniw Collective, told the Guardian. “They are working hand in hand with big oil."

Since May, Enbridge has operated its Line 5 under Michigan's Straits of Mackinac in violation of a shutdown order from Gov. Gretchen Whitmer. Those who oppose Lines 3 and 5 both warn of the potential for an environmental catastrophe in the event of a rupture.