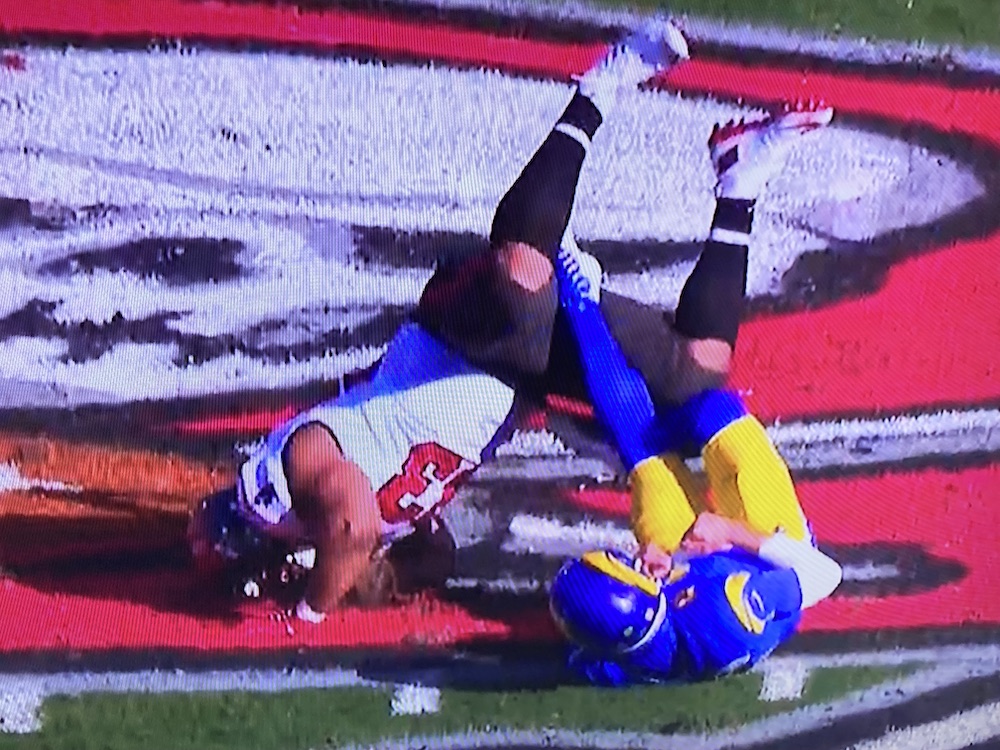 The game is called “football,” so Matt Stafford lifted his left, cleated foot up near the, uh, private footballs of Ndamukong Suh.

“You see him kick me?” Suh shouted at the referee.

However, they did see Suh tower over Stafford and glower down at him and then point his finger in Stafford’s face to vow “I’m going to fuck you up” (according to lip-readers on Twitter).

This personal clash had added focus for football fans around Detroit. Both men are former first-round picks of the Lions and they were Detroit’s team leaders in a different decade.  Both veterans should know better than to lose their composure at a bad time.

Stafford, now in his 13th NFL season, remains one of Detroit’s most popular athletes in his first year in Los Angeles. Suh, in his 12th. season and with his fourth team, has cooled his act in recent years but still carries the reputation as one of the game’s dirtiest players. In the past, he has stomped and choked his foes.

Sports officials usually penalize the retaliation and not the provocation. And they sometimes consider the reputation. So it was Suh – not Stafford – who got the 15-yard penalty for unsportsmanlike conduct at a crucial moment in Sunday’s 30-27 Rams’ victory in Tampa that put Stafford one victory away from the Super Bowl.

Review of video shows that Suh charged in unblocked and forced Stafford to hurry and throw an incomplete pass late in the first quarter with the Rams leading, 3-0.

Suh then tumbled over the quarterback, who fell to his back with his legs in the air in what is sometimes called a “delivery sack.” At this moment, the feet of the two men seemed to tangle together as Suh also landed upside down.

As Suh threatened him, Stafford raised his right palm in a gesture that seemed to say to Suh: “Dude, what’s your problem?” 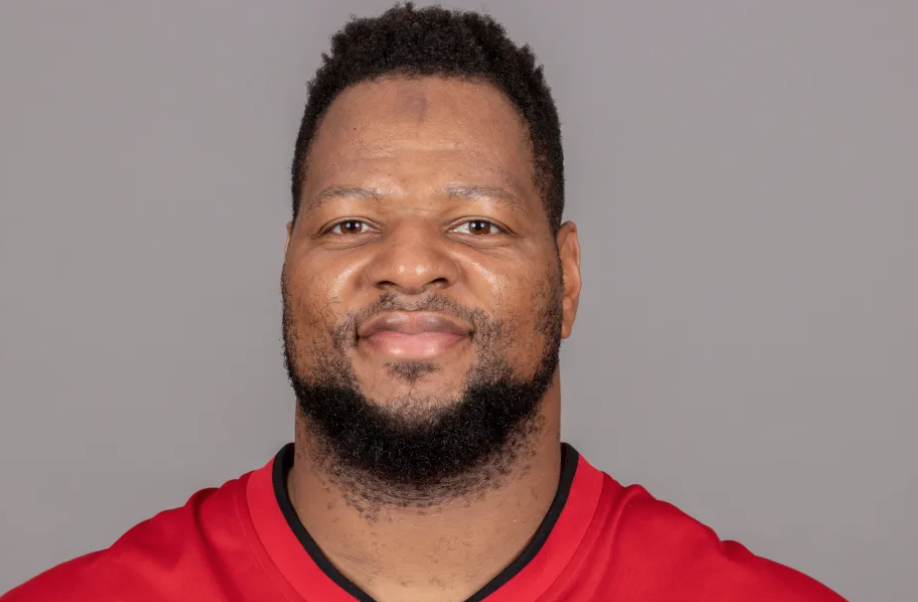 “He landed on me,” Stafford said after the game, “and I just kind of tried to get him off me as fast as I could. And then he was talking. And I didn’t think too much of it, to be honest with you. I went on to the next play. It wasn’t a big deal.”

Except that it was a big deal and an omen of what was to come. The penalty against Suh gave the Rams another first down.

Three plays later, Stafford threw his first of two touchdown passes to help put the Rams in the National Conference championship next Sunday against San Francisco. Should they win that one, the Super Bowl will be held, coincidentally, in the Rams’ home stadium.

Stafford also scored on a quarterback sneak. He completed 28 of 38 passes for 366 yards and two touchdowns. He threw no interceptions. In a splendid showcase, he displayed how his talents were wasted in more than a decade in Detroit.

And he remained cool under pressure. After the Rams squandered a 27-3 lead by losing four fumbles, Stafford showed poise and presence in directing a passing drive in the final moment to set up the game-winning 30-yard field goal by Matt Gay.

The final completion went for 44 yards to receiver Cooper Kupp who was supposed to be a decoy but shook loose behind single coverage when the Bucs blitzed. After hurrying his team to the line of scrimmage, Stafford spiked the ball to stop the clock.

When the ball bounced back, he caught it and ran off the field and spiked it again, a deed that could have been penalized. He headed to the bench flexing his arms and chest and shouting joyously at his teammates. 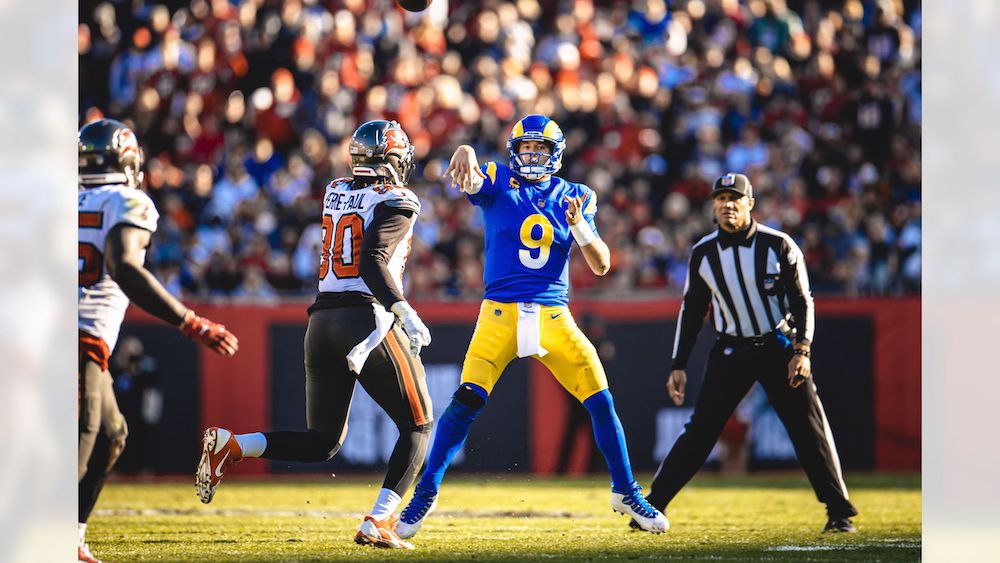 “I’m glad they didn’t flag me for spiking it there,” Stafford said. “All the guys on the sidelines were like `Man, you were in a dark place’ and I said `Sometimes, you gotta go to those places, you know?’”

Stafford’s Rams defeated Tampa’s 44-year-old quarterback Tom Brady, who might have played his final game for the defending champions. Brady suffered a bloody lip and gave the officials plenty of lip about it.

After Tampa’s comeback, Stafford said the Rams’ victory was like “stealing somebody’s soul.”

“You get to reach in there and take it from them,” Stafford said. “That’s a whole lot of fun.”

But Stafford could have lost the game on the first play of the winning drive when he tried to run with the ball and nearly fumbled it. He lost a yard. Had he fumbled it away, it would have been the fifth Rams’ fumble turnover and would have set up a Tampa victory.

“I was thinking I was going to run it,” Stafford said. “That was a poor idea.” As he spoke, he stroked his beard, trying to keep a smile off his face.

Suh did many good things for Tampa. His strip tackle created a fumble that set up Tampa’s tying touchdown. On Stafford’s final pass play, he got to the quarterback and knocked him down with another delivery sack.

But that was too little, too late. There were no kicks and words afterward. Stafford ran down field and rallied his team for the final spike and field goal and onward to football’s Final Four.