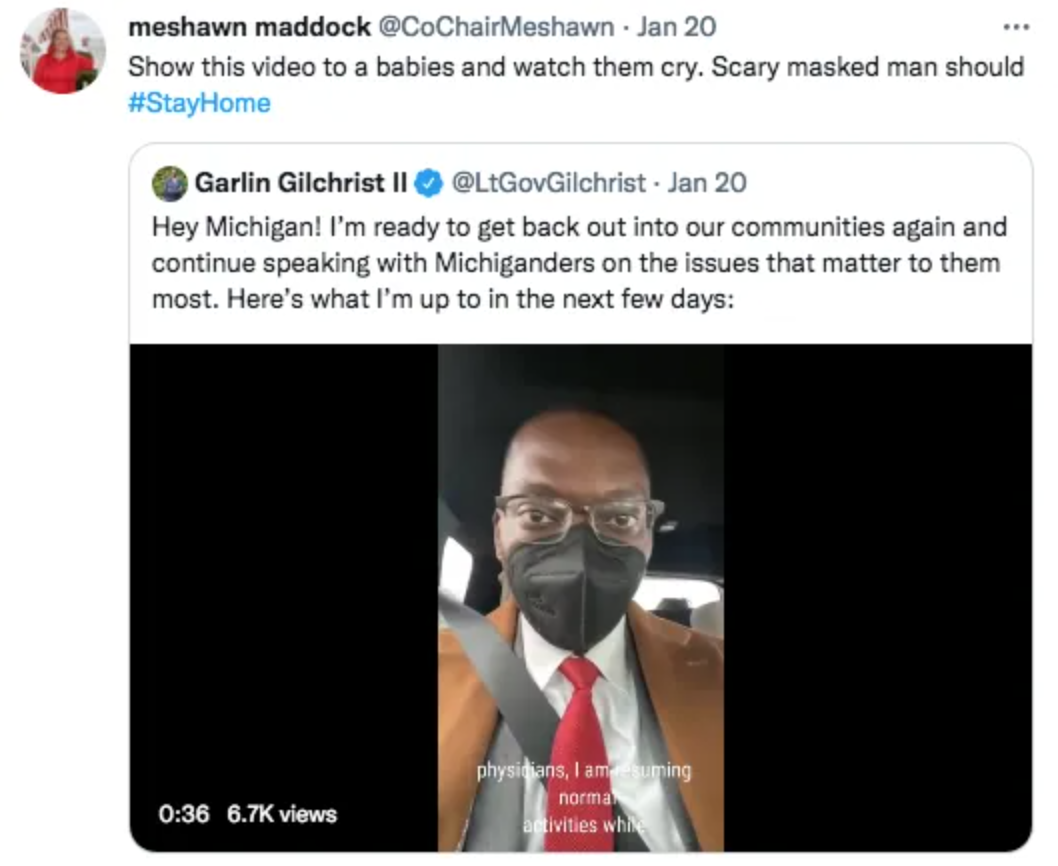 Meshawn Maddock, co-chair of the Michigan Republican Party, was trying to deflect criticism over the weekend after calling Lt. Gov. Garlin Gilchrist a "scary masked man." Some accuse her of racism.

"Is it still accurate to call something a dog whistle as it's actively shattering your eardrums?" Lavora Barnes, chairwoman of the Michigan Democratic Party, said in a statement, The Detroit News reported Sunday. "Meshawn Maddock's racism was on full display with this horrendous comment about Lt. Gov. Gilchrist, and it adds to the already miles-long list of her actions that the MIGOP and Republican elected officials and candidates continue to endorse with their silence."

Critics also include state Sen. Laurie Pohutsky, D-Livonia, who tweeted Saturday: "This is disgustingly racist and anyone in her party that recognizes that needs to call her on it." At that same platform, Congresswoman Rashida Tlaib of Detroit called Maddock's comment "disgusting" and said: "The MIGOP leadership is showing us who they really are."

Julia Pulver, a West Bloomfield nurse who ran for a state House seat in November 2020, commented on social media: "This is not just a political jab. This is a race-bating attack on a Black public figure during a time of rising political violence."

Pushback is bipartisan. Mike Cox, a Republican who was Michigan attorney general from 2003-11, tweeted Sunday: "No one even remembered who Michigan’s LT Gov was until the white-hooded dropped her racist tweet. Great voter outreach."

The current AG, Dana Nessel, suggests that Maddock "might have some soul searching to do."

The Republican chair responds by texting to The News that children are going "to be scared by government agents forcing mandates on them that make it harder for them to learn."

"It's scary that our schools aren't open yet, and students are going (through) another year of learning loss," Maddock said. "Gilchrist and (Gov. Gretchen) Whitmer are frightening us all with their insane policies. Scary."