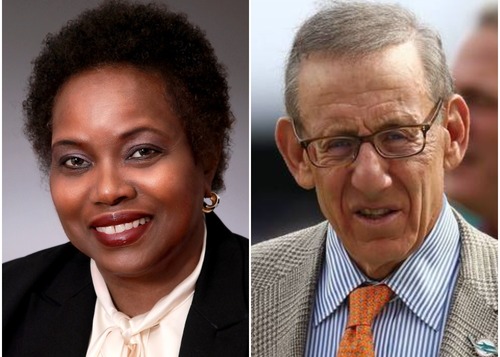 Billionaire and native Detroiter Stephen Ross is under fire over explosive claims that he offered to pay the then-head coach of his Miami Dolphins to throw the 2019 season, effectively hurting the coach's career because he didn't comply.

The allegations are laid out in a racial discrimination suit filed Tuesday on behalf of Brian Flores against the Dolphins and other NFL teams. Flores was in 2019 one of just three Black head coaches in the 32-team league where 70 percent of players are Black.

According to the suit, Ross offered to pay Flores a $100,000 bonus for every game he lost that year in an effort to get the top pick in the draft. In early 2020, he also allegedly pressured him to recruit a prominent quarterback — reportedly Tom Brady — in violation of league tampering rules.

"From that point forward, Mr. Flores was ostracized and ultimately he was fired," the suit says. "He was subsequently defamed throughout the media and the league as he was labeled by the Dolphins brass as someone who was difficult to work with. This is reflective of an all too familiar 'angry black man' stigma that is often casted upon Black men who are strong in their morals and convictions while white men are coined as passionate for those very same attributes."

Flores was fired at the end of the 2021 regular season after compiling a 24-25 record over two years with the team.

The claims against Ross have drawn a rebuke from a councilmember in the nearly 80-percent Black city where the real estate developer is helping build a University of Michigan satellite school.

“Why should the city of Detroit continue to do business with billionaire Stephen Ross if he practices systemic racism and advocated 'tanking' intentionally losing of NFL games as Brian Flores alleges?” first-term Detroit City Councilwoman Mary Waters asks in a media release announcing that her office will look into the allegations.

“Brian Flores, a Black man, enjoys the presumption of credibility in Detroit, America’s Blackest and arguably poorest city, during a time when corporate profiteers have dominated the credibility platform in Detroit with hundreds of millions in corporate welfare doled out on the backs of Majority Black Detroit.”

Waters says she plans to present a resolution to the full City Council for action once her office completes its review.

The Dolphins have said they “vehemently deny any allegations of racial discrimination and are proud of the diversity and inclusion throughout our organization.

"The implication that we acted in a manner inconsistent with the integrity of the game is incorrect."

In addition to partnering on the University of Michigan Detroit Center for Innovation slated for the area of Little Caesars Arena, Ross' firm plans an 83-unit apartment building nearby with local developer, The Platform.

Detroit City Council sold the companies an acre of property for that project, at Charlotte and Third Streets, for $500,000 in late June.

All of the apartments are intended to be leased at rates affordable for households earning 60 percent of area median income (AMI), or about $34,000 per year for an individual or $48,000 per year for four people. That would make the project far more accessible than most other new developments in the city, which are required to only set aside 20 percent of their units as affordable for people earning 80 percent of AMI. The deeper affordability is contingent upon whether the developers can receive Low Income Housing Tax Credits.

Similarly, while the overwhelming majority of development projects in Detroit are supported by city incentives, the $250-million UM project is not.

Initially announced in 2019, the innovation center is the New York developer's first foray into his hometown and is expected to be just the beginning of his investment.

"What we’ve seen with Ross at the UM campus is he makes a large contribution. Then, he sees the effect he has, and then he makes more contributions," Erik Gordon, a professor at the UM business school named for Ross, told The Detroit News last summer. "It's not a one-time contribution."

Ross has devoted more than $30 million to an organization he founded in 2015 to help combat systemic racism in sports. Following his latest donation, last summer, he issued a statement shouting out Detroit as part of his inspiration.

“Growing up in Detroit, I saw firsthand what racism did to tear apart our community, destroy lives and further inequality," Ross said in a statement at the time. "I started (the Ross Initiative in Sports for Equality) based on the belief that our nation must address the scourge of racism directly to achieve true unity."

Ross could face a criminal investigation if the claims leveled by Flores can be proven, attorneys have said. The NFL Network reports it has spoken to a witness who said he heard Ross make the monetary offer and that Flores' lawyers say they have evidence, including messages from general manager Chris Grier, to support their claim.