The location of a "Save America Rally" with Donald Trump this Saturday makes some officials and residents uneasy in the small township hosting it.

The setting is Michigan Stars Sports Center in Washington Township, where Trump had an April 2018 event during his presidency that drew nearly 6,000 people inside and an estimated 10,000 more outside, where two Jumbotron screens were erected. The township, southeast of Romeo, has about 28,000 residents. 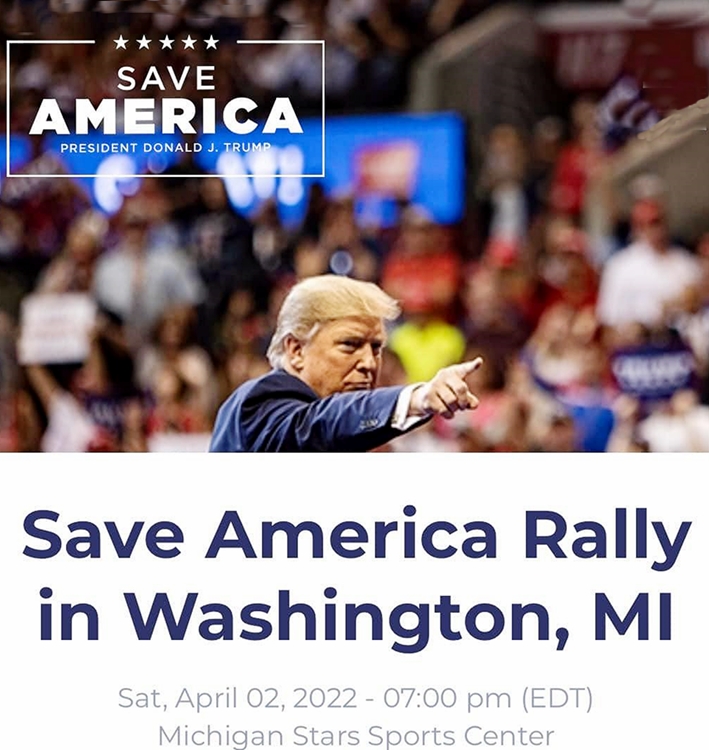 "This is a heavy lift for our department. It is a stretch for us to make this happen and I am not comfortable with it," Fire Chief Brian Tyrell told township trustees Monday, according to The Macomb Daily (paywall).

"We are very uneasy for using this building for something it was not intended to be used for." ...

Tyrell said the normal occupancy, based on the township fire code, is between 1,500 and 1,600 due to the configuration of the building and sprinkler systems inside. The chief said that back in 2018, they had to “get creative” with the fire code and had a “fire stand-by” with members on the department on site for the entire day.

"I cannot allow that building to be used that way again. I do not support this being hosted here," Schmelzer told the board. “I have no recourse but to issue him a ticket when this thing starts.”

The multisport facility on 80 acres opens its parking lots at 8 a.m. and its doors at 2 p.m. with warm-up entertainers, followed by speakers at 4 p.m. and Trump at 7 p.m.

Those at the microphone will include Matt DePerno, seeking nomination for state attorney, and Kristina Karamo, running to be the party's pick for secretary of state at an April 23 party convention in Grand Rapids.

Politicians running in congressional and legislative primaries also will likely get turns at the podium.

The local Board of Trustees voted 4-1 Monday to allow parking on public land around the facility near 30 Mile Road and Powell Road.

There will be parking allowed on a seven acres of township property adjacent to the Michigan Stars site, five and a half acres near the Powell Cemetery and another four acres just south of the cemetery.

The dissenter, Treasurer Mike Nicely, is quoted by the local daily as saying:

"This is farmland, this is not residential drivable land and things could get ugly quickly.

"If our experts are saying that it is not working, it’s dangerous or it’s risky, I am not in favor of it."

Concern about muddy dirt roads also was voiced by Paul Bowers, who lives near Michigan Stars:

"That road is impassable," he told the board. "You guys better have wreckers ready and have a fleet of them."