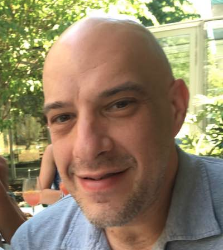 Scott Burnstein: "This was a Detroit job."

The FBI has shown interest in digging up a former landfill in Jersey City, N.J., as a possible Jimmy Hoffa burial site. Last October, the bureau did a preliminary site survey.

Detroit mob expert Scott Burnstein, founder of The Gangster Report, tells Deadline Detroit he's skeptical of the landfill theory. Still, he sees a 50-50 chance of finding the body there, only because he greatly admires Dan Moldea, an investigative reporter and Hoffa expert who says he has information pointing to the former dump below a highway.

But Burnstein believes it's more likely the body was disposed of in Metro Detroit after Hoffa's 1975 abduction in Bloomfield Topwnship. Detroit mobsters would have been insulted had outsiders from Jersey been needed to help dispose of it, in his view.

"This was a Detroit job from top to bottom. The Detroit Mafia has what I would term a Ph.D in gangland homicide."

Below is our interview: