Inside a Detroit abortion clinic on the eve of Roe's fall 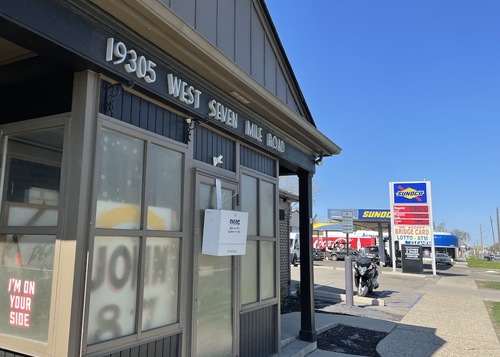 Gina thought something was wrong with her pregnancy when she was suddenly so physically drained by her job as a Chrysler vehicle inspector she had to start calling in sick. Then came a flattening depression, rendering her unable to take a shower or comb her hair.

“I never felt like this,” said the 26-year-old Detroit mother whose previous pregnancy was complication-free. “I could have killed myself.”

Gina wanted an abortion, but Michigan's Medicaid does not cover the procedure and she’d been let go for missing too many shifts. Her exhaustion made finding a new job impossible.

And so began a weekslong scramble to scrape together the $500 needed for the procedure. After unsuccessful calls to friends and family who had “too much going on” to give away such a large sum, Gina’s sisters eventually managed to save enough for her to get an abortion this Saturday, at the start of her second trimester.

More difficulty looms for Michigan women like her should the U.S. Supreme Court overturn Roe v. Wade and trigger a dormant state-level abortion ban from 1931. Absent additional intervention, the change could force those seeking to safely terminate their pregnancies to travel beyond the state’s borders, to places like Illinois or Canada.

Those who can’t make the journey might have to turn to dangerous alternatives or have children against their will, experts say. In Detroit, where many residents are low-income and lack access to reliable transportation, the consequences could be particularly pronounced. In 2020, 1 percent of city residents had abortions — five times the state average. Studies show low-income women are far more likely to have an unplanned pregnancy than their affluent counterparts, in part due to the cost and consistency required by birth control.

Gina and two other patients at the Scotsdale Women’s Center on 7 Mile last weekend said the additional hoops of a possible ban would have likely forced them to have unwanted children. They declined to give their full names or used aliases for privacy reasons.

“This clinic is literally like seven minutes from my house,” said Gina. “If I had to go through all this trouble to get this just seven minutes away, could I go a thousand miles? That’s really trouble.”

Southeast Michigan’s immediate U.S. neighbors would likely offer no refuge. Republican-led Ohio and Indiana appear poised to enact state-level bans should Roe fall. Nearby Pennsylvania’s future, meanwhile, could depend on who controls state government after the next election.

Even Canada could be out of reach, with its entry requirements (current passport, Covid test) and abortion wait lists one Planned Parenthood official there said are already “through the roof."

While medication abortions could help bridge the gap in states with bans, obtaining them would be illegal. Michigan women can currently abort by pill up to their 11th week of pregnancy for about $500; the two-drug combination accounts for more than half of recent U.S. abortions.

Questionnaires recently completed by patients of the Detroit clinic shed light on the travel burden a ban could impose. Some already come from outstate, where clinics are sparse, or Ohio, where a restrictive law prevents abortions for women more than 20 weeks into pregnancy.

On top of the cost of the procedure, one patient, a 24 year-old Black woman, reported losing up to $300 in wages and spending up to $200 on travel and accommodations, as Michigan law requires women to wait 24 hours after consenting to an abortion. Another, 26 and Black, reported roughly the same expenses, plus childcare costs of up to $80.

Below a prompt asking how hard it had been to gather the money, both women circled “extremely.”

“I’m surprised how many people actually make it in. It seems so challenging,” said Sheya Saraf, a medical student conducting the research on a visit from the United Kingdom, where abortion is free. “And this is now, when things haven’t even been officially rolled back. … I can’t even imagine what’s going to happen to these women and their families.”

For Abby, a 22-year-old single mother of two from Dearborn, having another child is untenable. Through tears, she described how she earns just $300 a week as a part-time assistant for an accountant, having recently left her newborn’s abusive father after he hit her toddler daughter.

“I already feel like I’m behind in life and I feel like I can’t give my kids a good life unless I get myself together,” said Abby, who starts college in the fall. “If they ban it, it’s just going to cause a lot of problems for people. People are going to get stuck in places they don’t belong.”

The implications of a possible state-level ban were just beginning to set in for patients at the clinic. While some were unaware Michigan has an abortion ban on the books, others have called asking for their appointments to be bumped up, said executive director Sam Mills, who asked we withhold her real name for fear of reprisal from anti-abortion activists. Protesters regularly hound patients and staff entering the facility.

Mills, however, remains optimistic. Her desk is piled with clipboards for a petition effort to put the issue to voters in November. Gov. Gretchen Whitmer and Planned Parenthood have separately filed lawsuits to prevent the ban, enacted when there were no women serving in state government, from going into effect. One case would ultimately be decided by the Michigan Supreme Court, where Democrats have a 4-3 majority, while the other is going before a judge who has donated to Planned Parenthood.

The clinic director was less buoyed by prosecutors’ vows not to enforce a ban. Michigan Attorney General Dana Nessel has said that under the old law, a doctor who performs an abortion and possibly the patient could face up to four years in prison. Though Nessel and Wayne County Prosecutor Kym Worthy have both said they would not pursue such cases, Mills doubts providers will stay open based on those assurances.

“Though it’s looking ugly, it’s also looking like there's light at the end of the tunnel,” Mills said.

The end result may be a monthslong period that leaves Michigan women seeking to terminate their pregnancies in limbo, followed by an influx of abortion refugees if the state indeed becomes a safe haven.

But for Gina, even a brief period in which the government limits women's choice is wrong.

“They gotta let people make their own decisions,” she said. “They don’t know what people go through in life, and what they can and can’t handle. No one should pick and choose for them.”