"Here you go, honey, something special for your birthday."

"Thanks, mommy! It's what I always wanted! Funeral Director Barbie!" 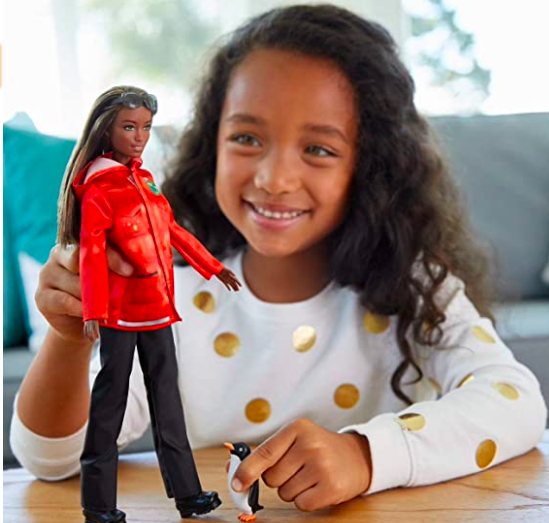 This is Polar Marine Biologist Barbie. Why not a funeral director? (Photo: Amazon)

With some embroidery, that's the vision of Southfield funeral director Sarah Brown-Derbah, who thinks it's time for Barbie -- the doll who's been everything from an astronaut to a zoo director -- to put on a tasteful black dress, dial down her cheerful smile a few degrees and start modeling mortuary careers for women.

To that end, Brown-Derbah has started a petition to the Mattel Corp., the fashion doll's maker. The Free Press reports:

“I've been looking for a funeral director Barbie for probably about 10 years, Brown-Derbah, of Southfield, said, "and I noticed the Barbie line has expanded.”

Brown-Derbah is the funeral director at Haley Funeral Directors, on Northwestern Highway in Southfield. The business stands out because of its green roof. She collects Barbie dolls, and her mother has given her one — created during during the same time frame — for each time she graduated from a school. Brown-Derbah also is a member of the historically Black Alpha Kappa Alpha Sorority Inc.  and so said she was excited to secure the centennial Barbie created for that sorority when it came out.

It's not so far-fetched. The Barbie careers line has indeed expanded, and collectors can find an "Inspiring Women" line that includes Maya Angelou and Ella Fitzgerald, the Freep reports. So a funeral-director Barbie is well within the realm of possibility for Mattel, if the market is there.

“It's a good way to inspire little girls,” she said. "Also, it's a good way to pay honor or tribute to women in funeral service. Honestly, very little has been done for us with the pandemic and we work very hard. I don't even think people really even notice.”

Whatever Mattel decides, we hope the hearse (sold separately) is pink.