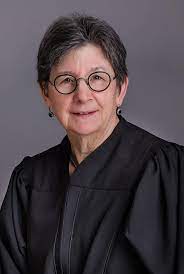 Judge Elizabeth Gleicher says her injunction "preserves [the] public's interest in the stability and predictability of the law."

Pro-choice advocates score an interim court triumph Tuesday that state Attorney General Dana Nessel calls "a victory for the millions of women fighting for their rights."

A Court of Claims judge on Tuesday ruled Michigan's mostly dormant abortion ban, which would go into full effect if Roe v. Wade is overturned, cannot be enforced as court proceedings on the constitutionality of the statute move forward.

Court of Claims Judge Elizabeth Gleicher granted Planned Parenthood of Michigan's request for a preliminary injunction barring the enforcement of the law that has remained on the books, but essentially not enforced, since the 1973 U.S. Supreme Court decision.

Gleicher's ruling in Planned Parenthood v. Attorney General comes as anti-abortion groups, Right to Life of Michigan and the Michigan Catholic Conference, have called for her recusal. Gleicher disclosed annual contributions to Planned Parenthood of Michigan and previous work as a volunteer attorney for the American Civil Liberties Union in 1996-97 in the Mahaffey v. Attorney General case on abortion.

"A preliminary injunction furthers the public interest, allowing the court to make a full ruling on the meritsofthe case without subjecting plaintiffs and their patients to the impact of a total ban on abortion services in this state," today's ruling says. "Maintenance of the status quo preserves [the] public's interest in the stability and predictability of the law."

Nessel, automatically named as the defendant in a challenge to state law, says in a statement:

"This injunction is a victory for the millions of Michigan women fighting for their right to bodily integrity and personal freedom. I have no plans to appeal and will continue to act in the best interest of the health, safety and welfare of the people of Michigan."

Planned Parenthood's advocacy division tweets this reaction: "This is a victory for reproductive freedom in Michigan, and we will not stop until this dangerous law is blocked once and for all!"

► Full text of the decision