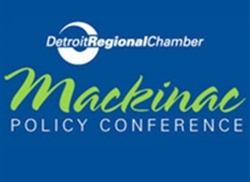 While James Craig and Perry Johnson fight to gain Aug. 2 ballot lines, despite a Bureau of Elections finding that they lack enough valid petition signatures, the Detroit Regional Chamber yanks them from a prime showcase next Thursday on Mackinac Island in front of hundreds of business, civic and media attendees.

Because they're "ineligible to appear on the primary ballot for Michigan governor [they] therefore are no longer eligible to participate in the Republican gubernatorial candidate debate during the 2022 Mackinac Policy Conference," the business group's government relations vice president, Brad Williams, says in a statement.

The chamber updated its debate listing Friday morning on the conference agenda:

Before and after listings, with Garrett Soldano's last name misspelled (red lines added)

The action follows a 2-2 vote Thursday by the Michigan Board of Canvassers, which split along party lines on whether to bar five candidates as recommended Monday by the Bureau of Elections because most of their submitted signatures were fraudulent. The politicians now must try in court to get a chance with voters.

The Detroit chamber fills their debate chairs next Thursday with candidates Tudor Dixon and Ralph Rebandt, who hadn't been invited earlier because of low support levels in statewide polls. (The good news for Dixon comes three days after she was endorsed by Dick and Betsy DeVos and their family.)

The one-hour debate in a lawn tent, which also includes Kevin Rinke and Garrett Soldano, comes on the last full day of a sold-out conference at the Grand Hotel that starts Tuesday afternoon.

If Craig or Johnson requalify for the primary by 8 a.m. Thursday, either or both can join the four debaters, Williams says.