By THE DEADLINE DETROIT STAFF

There goes the neighborhood. 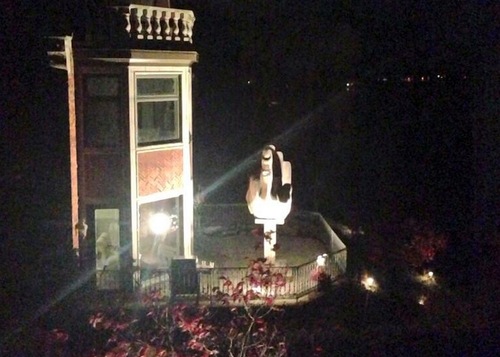 An Orchard Lake man -- OK, he's not just any man; he's infamous for employing lots of strippers, being shot twice and for starring in an upcoming reality show on HBO/Cinemax -- has erected a large sculpture of the middle-finger salute. In his backyard.

The sculpture is almost 12 feet high. A spotlight illuminates it at night.

The man is Alan Markovitz, longtime impresario of metro Detroit topless clubs, whose adventures are scheduled to be aired on the national cable outlet this winter on a show titled "Topless Prophet." He was the subject of a Deadline Detroit profile last month.

Markovitz recently moved into a lakefront home in Orchard Lake, and he spent $7,000 on the digital objet d'art. It's made of a bronze-like material.

He says he's angry at the man who lives next door because that man, Markovitz says, had an affair with the woman who was Markovitz's wife. She is now his ex-wife. And she lives next door.

If Markovitz is so angry, why did he move next door to the man and his ex-wife?

He claims it was a coincidence that a realtor showed him the house. But after that, "karma" took over.

Markovitz said people have told him to let it go, but he can't do it, he said. It's about principle.

The statue was unveiled about a week ago in front of a group partying in the yard.

Once the tarp was removed, the guests went crazy, Markowitz says.

Markovitz has never been shy about publicity, but he said he has nothing to do with circulating photos of the sculpture.