A gold 1979 Trans Am, above, plays one of the movie’s lead characters. It comes on screen in an abandoned Detroit church, races through the city and crashes into the Detroit River off the Belle Isle Bridge. It also impregnates a woman.

Michael H. Miller, writing in Gallerist, says the Trans Am driving off the bridge is "is a nod to both Harry Houdini’s most controversial escape act, in which he bound himself inside a wooden coffin and was lowered into a hole in the frozen Detroit River, and also the legend of Set’s murder of Osiris, which involved Set imprisoning Osiris in a coffin and dumping him into the Nile." 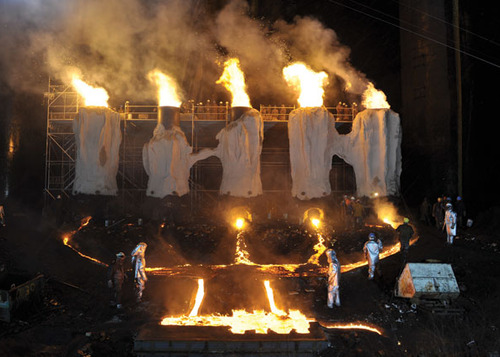 "River of Fundament" is such an epic that it has two intermissions. The film was inspired by Norman Mailer’s 1983 novel, "Ancient Evenings," which is set in ancient Egypt and deals, in a very complex way, with reincarnation. The film, which includes performances by Maggie Gyllenhaal, Paul Giamatti, Ellen Burstyn, and Elaine Stritch, was shown earlier this month at the Brooklyn Academy of Music.

"The hours are long, the filming conditions are potentially life-threatening," actress Aimee Mullins told Vogue. "There are 25 tons of molten steel in this film! But it’s beautiful and it makes your adrenaline surge.

The New York-based Barney, who is well known in international art circles, spent time in Detroit in 2010. Early that fall, he staged a tableau for about 200 people that, according to Jerry Saltz in New York magazine, included "a freezing barge ride down the Detroit River, where the audience witnessed, among other things, a crane dredging up a 1967 Chrysler Imperial. There was also actress-athlete Aimee Mullins as Egyptian goddess Isis seated semi-naked on an engine block filled with live, writhing snakes. In the spectacular finale, five enormous customized furnaces poured molten metal, including parts of the Imperial, into a fiery casting pit that drained into a mold of a massive Egyptian Djed, an ancient symbol associated with Osiris, whose own body was cut up into pieces before it was retrieved and reassembled."

In Hyperallergic, Chloe Bass writes of the film:

Its take on Detroit is summed up in one of the many throwaway lines of dialogue: “Detroit is a shithole.” In the context of the film, “shithole” could be seen as a compliment — after all, the sewer is its site of ultimate rebirth — but the aesthetic treatment of the urban environment suggests otherwise.

Yet when thinking about cities themselves as an epic form, and what we can enact through both urban planning and unplanning, Detroit holds immense power. Once you’ve been there, it’s hard not to see a bit of Detroit everywhere. It’s also hard not to see a bit of everywhere in Detroit. Even Barney captures this, showing the cultivated nature of Belle Isle Park, which calls to mind any number of American historical manors, or waterway images that make the Detroit River and Newtown Creek difficult to distinguish. This, not the ruin, is the incredible power of Detroit.

It’s sad that Barney falls into the same trap as so many other apparent Detroit enthusiasts: seeing the city as simply space, rather than as something to do with people.

In Detroit, slow panning shots of an urban hellscape give way to more action involving the car, which races around mysteriously and drives off a bridge from which Houdini once jumped. A monumental set piece takes place at an abandoned steel plant where Barney and his crew spent months designing and building a custom set of furnaces to melt rock into metal. Onscreen, five towers rise, fire shooting from their tops, as hard forms are made molten by temperatures topping two thousand degrees. “It was very dangerous,” Barney said. Actors wore safety suits; an audience watched. The result of the orange streams of iron, bronze, lead, and copper was an indelible film scene and a series of sculptures made from twenty-five tons of material poured.

Most New York critics appeared perplexed and less than enthusiastic.

"As 'River of Fundament' dragged on and descended further into its pit of self-indulgent ooze, I found myself increasingly indignant at being made to sit through it," wrote Jillian Steinhauer in Hyperallergic.

She adds: "The visuals are stunning. Shit has never looked so good..."

Below: "River of Fundament" trailer.