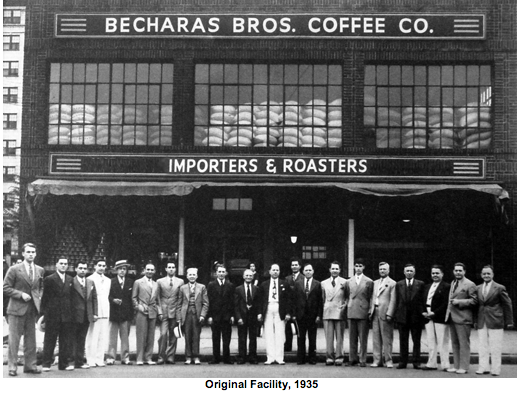 The Becharas Brothers Coffee company of Highland Park, a wholesale distributor that sells to the military, Big Boy and other restaurants and institutions, is 100 years old this year.

Nick Becharas and other family members run the joint that  has weathered many changes in the very competitive business, writes Detroit Free Press reporter Brent Snavely.

Founded in 1914, Becharas Brothers has outlasted about 25 local competitors, overcome the loss of some of its biggest clients and weathered dramatic price swings in the coffee market.

“We’ve taken pride in being able to reinvent ourselves every 10 to 15 years,” said Nick Becharas, the company’s president.

After oil, coffee is the world’s most valuable traded commodity. But coffee prices have been more volatile than oil in recent years. A small coffee-roasting business must be a master not only of roasting and packaging coffee, but compete against the biggest traders in the commodities market.

In the 1920s, the Becharas Brothers produced coffee at a plant on Vernor Highway. The company moved to Highland Park in the 1960s, Snavely reports.

Now of days, the business operates as a private-label, contract packaging operation, packaging coffee for corporations, restaurants and country clubs that brew it in large coffee makers, the Freep reports.  About  75% of sales go to  corporations and food distributors, with the remaining going directly to restaurants.

The Freep reports that the company produces about 50 private labels. -- A.L.