There are a lot of well-known disadvantages when a city loses more than one million residents in 60 years, but some of the advantages are cheap rents and empty spaces.

The recent art boom is hard to miss, from ubiquitous graffiti to the opening of galleries to new cultural events -- such as DLECTRICITY -- to the establishment of the Museum of Contemporary Art Detroit.

And now, the Wayne State University Press has published an impressive book that documents the art explosion: “Canvas Detroit,” by Julie Pincus and Nichole Christian. It’s a 296-page collection of photos, essays and interviews that is remarkable for its range, the quality of its reproductions and its non-stop energy. 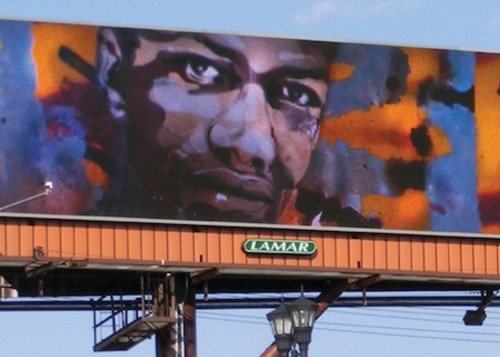 Much of the art is the work of Detroit-base artists, and some was left behind when out-of-town artists passed through town. Some of the creativity plays off the city’s epic abandonment; other works seek to inspire revitalization.

This is a book in which Tyree Guyton is nowhere near the most interesting artist who is profiled. Guyton is there, as are familiar creative types such as Scott Hocking, Jerome Ferretti and the Hygenic Dress League. 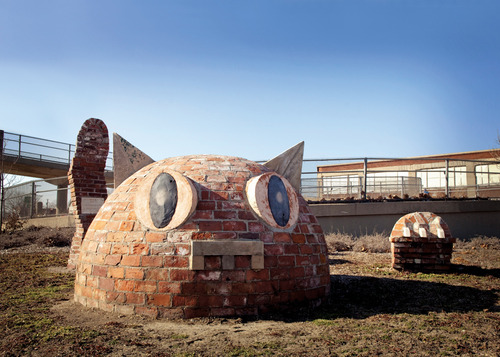 Joy, 38, paints on the inside of windows in tall, abandoned buildings. A decade ago, he and associates spent three years decorating nearly 1,300 windows in the United Artists Building with Mayan-style iconography. (The Ilitch organization, which owns the building, wiped the windows clean before the 2006 Super Bowl.) More recently, Joy painted a four-story rising run in the now-demolished Lafayette Building.

Sauve is the sculptor who has erected orange steel figures atop carefully chosen Detroit buildings.

Laget, a WSU-trained illustrator, uses spray paint, stencils and discarded newsprint to create stylized posters of such figures as Hazen Pingree, the famous mayor of the 1890s, and Aretha Franklin.

“For a while, every time I’d put a Pingree on Woodward, someone would come along and butt out their cigarettes on his eyes,” Laget told the authors. “I think that’s great; any kind of response or interaction that causes people to pause consider what’s going on.”

Such tampering is not the worst thing that happens to Detroit street art. Sometimes it just disappears.  It even melts: “Ice House” was a temporarily frozen sculpture that arose in the winter of 2010 when two New Yorkers, Mattew Radune and Greg Holm, poured tens of thousands of gallons of water on an abandoned east-side house to draw attention to the issues of foreclosure and blight.

Says Laget: “A big part of the process for me is to document the dissolution of what I put up on the streets. It’s not made to be permanent.” 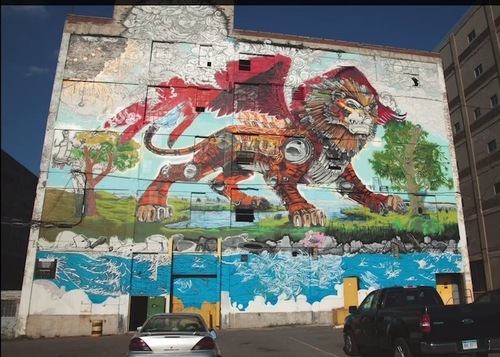 The art that Pincus and Christian turned up also includes such performers as Matthew Barney and Theatre Bizarre.

Barney, the New York-based sculptor and filmmaker, chose Detroit as a backdrop for “River of Fundament,” his new film that is very loosely based on the Norman Mailer novel, “Ancient Evenings.” Among his activities here was a barge trip, the unearthing and cutting apart of an automobile, and a concert outside an abandoned glue factory.

The better known Theatre Bizarre was the “macabre backyard costume party” near the State Fairgrounds that has morphed, after city harassment, into an evening inside Masonic Temple.

The authors quote Theatre Bizarre creator John Dunivant as saying he is amazed the show was able to go on outside for more than a decade.

“Certainly Theatre Bizarre wouldn’t have existed without the conditions of Detroit,” Dunivant said.

“You could hide in plain sight because there was just so much neglect. The neighborhood was a war zone. The amount of dead dogs we found in just this one three-acre spot just made you sick. No one was paying attention.”

There are also images of a New York artist, Miru Kim, who had herself photographed naked amid the decaying 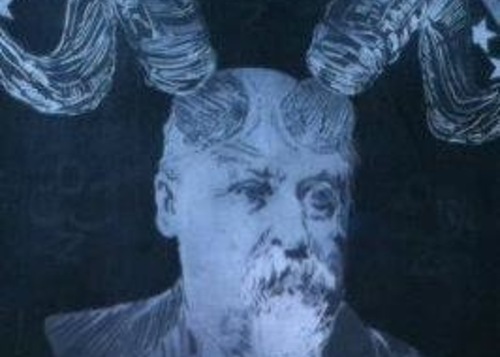 grandeur of the Michigan Central Station; orange abandoned homes; and “Mobile Homestead” by the late Mike Kelley, the world-famous artist whose work is a model of the Westland home in which he grew up.

Co-author Pincus is a photographer and award-winning graphic designer who grew up in metro Detroit and lives in New York. Christian, a native Detroiter, worked as a reporter for the Wall Street Journal, the New York Times and Free Press.

Christian interviewed many of the artists. She writes that she grew up in Detroit’s gritty North End and once believed that only natives could “see the beauty of a city long broken but never buried.”

She almost turned down the assignment to interview artists for “Canvas Detroit,” but changed her mind when she realized she was wrong in believing she had nothing to learn from “the well-worn narrative” of the “resurrection of creative Detroit.”

Christian wrote: “I vowed to see each person on the list as an individual, not a representative of Detroit’s so-called emerging creative class. I was also determined to let them speak without applying my super-sensitive Detroit filter to their stories.”

"Canvas Detroit," $34.99, will be in bookstores later this month. It is available from the Wayne State University Press website.

Garage, The Alley Project in southwest Detroit, by Paul Mungar and community youth.

"Monumental Kitty," in bricks, by Jerome Ferretti, along I-75, north of the Tiger Stadium site.

Welcome to Hamtramck, by Revok and Flying Fortress

"Chimera," the lion mural, by Kobie Solomon, Russell Industrial Center, I-75 north of I-94