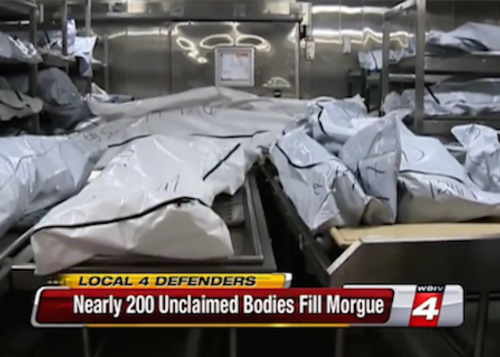 It's an eerie story.

Kevin Dietz of WDIV reports that there are nearly 200 bodies in the freezer of the Wayne County that are going unclaimed.

Dietz reports that some families simply don't care enough to come get the body of a loved one, or they don't have the money for a burial.

Albert Samuels, chief investigator for the Wayne County morgue, tells WDIV that some families of the dead even go to great lengths to avoid being found. He said they may change a phone number or simply won't answer the door when an investigator comes to the door.

If a body goes unclaimed after four or five days, it goes into the freezer.

For legal reasons, the county can’t cremate unclaimed remains and basic burial costs around $750. The state will pay $450 to bury an unclaimed body and the county pays $300, but with budget cuts it is increasingly difficult to find the money. It would cost less than $150,000 to bury all unclaimed bodies in the morgue.