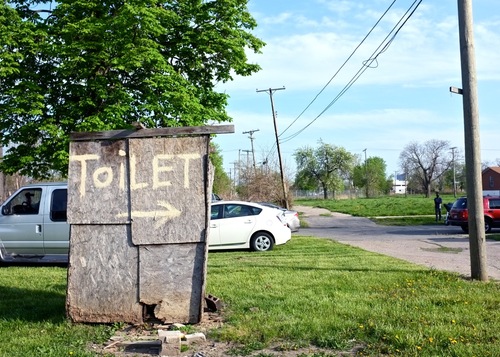 At John’s Carpet House, the arrow on the sign for the toilet points nowhere. The port-a-potty was stolen last summer, and 'Big Pete' Barrow is still trying to raise money to replace it.

“Miss Champaign out there with the bucket y’all,” Barrow bellowed into the microphone this past Sunday. His voice boomed over BB King’s “Sweet Sixteen” on the loud speaker system.

John's Carpet House sprawls across eight vacant lots on Detroit's east side, just south of GM’s Detroit/Hamtramck Assembly plant, at Frederick and St. Aubin. Barrow, who bought the land, is the organizer of the impressive gathering.

The sons and grandsons of singers like Sam Cooke and Jackie Wilson are regulars. Smokey Robinson came by once. Harmonica Shah, who has played harmonica the world over, is a staple. He left early on Sunday to prepare for a night set at Cliff Bell’s. Miss Champaign, moving through the crowd with the donation bucket, is Champaign Page, the blues singer and regular at Bert’s in Eastern Market.

Every weather-permitting Sunday Detroiters arrive to listen to live blues music, to dance and to drink. Impromptu grills spring up across the street, with magic marker-scrawled menus. Come hungry and you can get sausages, burgers, ribs, roasted peanuts for a reasonable price.

This past Sunday was the kind of day we’ve waited all year for—blue skies, temperatures in the 70s, the occasional and welcomed breeze. Still, because of the port-a-potty situation and because the grass had gone uncut, the band had been called off for the day. Barrow had told me earlier he wouldn't be out there.

So I was surprised to see him when I arrived. "I got a call that people was out here. They made me come out and play some blues," he told me. He was DJing a blues set from a large CD book and a battered laptop plugged into the loudspeakers.

The lack of a live band did not stop a man named Squirrel from moving through the crowd, blowing into a saxophone, or a woman with long curling locks of jet-black hair from noodling on a portable keyboard that hung from her neck. A handful of harp-blowers wandered around with harmonicas in their pockets.

I wondered how it is that the best blues spot in Detroit is without a proper toilet. 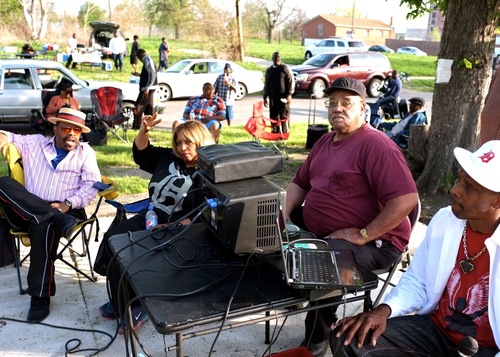 John's Carpet House began across the street, at the home of a drummer named John Estes.

Estes used to host weekly jam sessions in a small wooden shed built in his front yard. He covered the walls and the ceiling with carpet for insulation and better acoustics.

“He was a junkman by trade,” Barrow told me, “but he really loved the blues.”

“John’s was basically what you’d call a juke joint,” said Robert Smith, a harmonica player and cousin of Barrow’s. “I was just a greenhorn then. Anybody who wanted to play could come and play.”

“There’d be maybe ten or twelve people around back then."

But, Smith said, gesturing out at the field from behind the stage, “I came out here last summer and there were hundreds, might have been damn near a thousand people out here.”

As we spoke a lithe man in his forties or fifties, wearing a fedora and track pants, bolted across the stage, shaking hands. He shook Smith’s and headed towards a grill across the street.

“He was a Motown player,” Smith said to me. “All the Motown guys used to come play out here.” 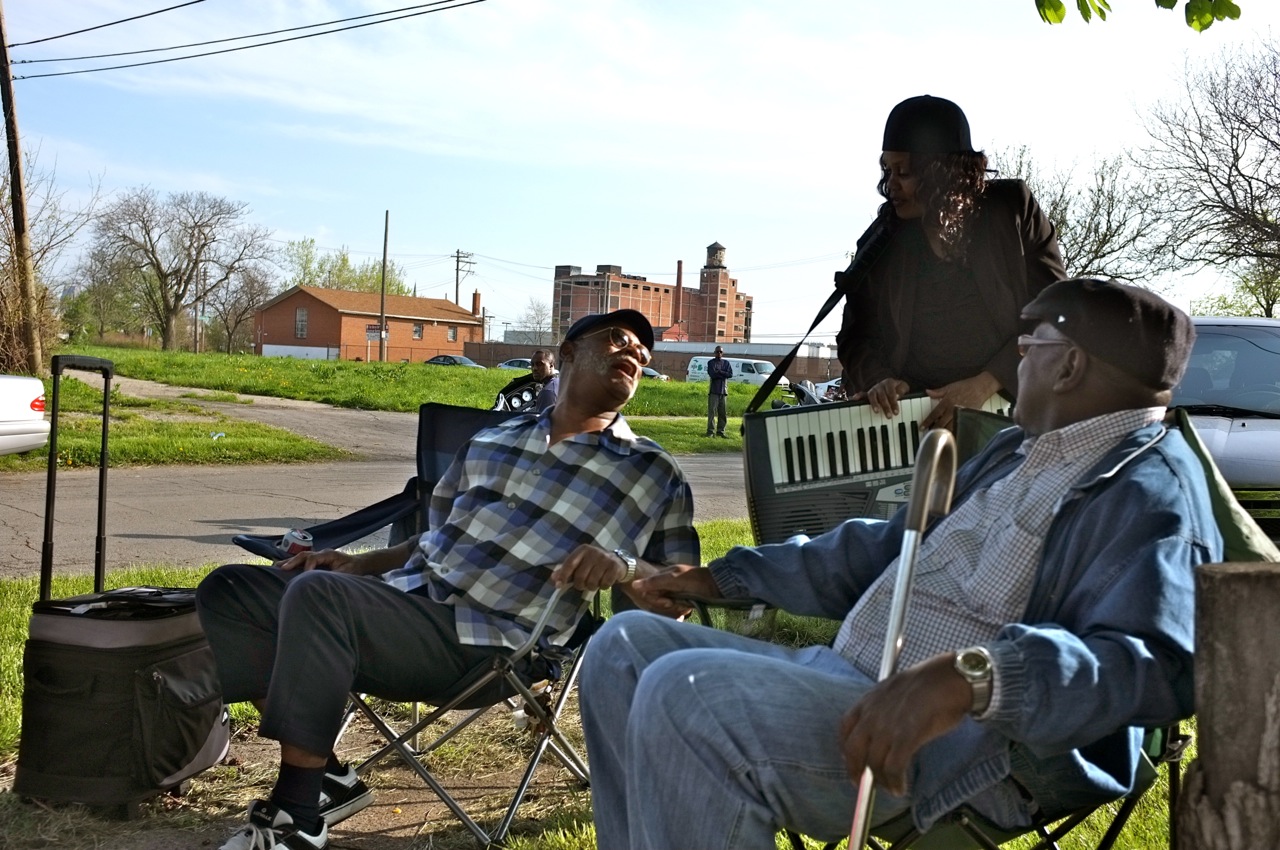 Estes passed away in 2005 and, some time after, the house fell into disrepair. Like other left-behind homes in the neighborhood, criminals and drug dealers took to the structure and eventually the house burned down.

Barrow reinstated the jam here on the empty field, at the northeast corner of Frederick and St. Aubin.

Last summer, I saw a man dancing in a button-down silk shirt here that read “John’s Carpet House and Big Pete’s Place.” I’ve heard others call it Pete’s, and others still simply The Jam.

“Hey Pete, The Jam going on this Sunday?” I heard someone ask Barrow at an east side Coney Island last week.

Barrow owns the microphones and the gas generators and paid for the last port-a-potty. After a series of small battles with city officials, he bought the land and whatever permits they made him pay for. What isn’t paid out of pocket by Barrow himself comes entirely from donations.

In a city of broke-down streets, nearby Chene Street stands out as being particularly broke down. Just a couple blocks to the east, Barrow says he can usually find a couple guys wandering down Chene each week that are eager to clear post-party trash for a few bucks. A landscaping company cuts the grass. That leaves gas for the generator and the band still to pay.

On Sunday, as the last notes of B.B. King's “Sweet Sixteen” rung out, Barrow brought the microphone back to his lips. “Please,” he boomed again into the microphone. “Drop some duckets,” he repeated, annunciating every syllable: “In. The. Buck-et.”

Donate to the new port-a-potty fund at the John's Carpet website here. 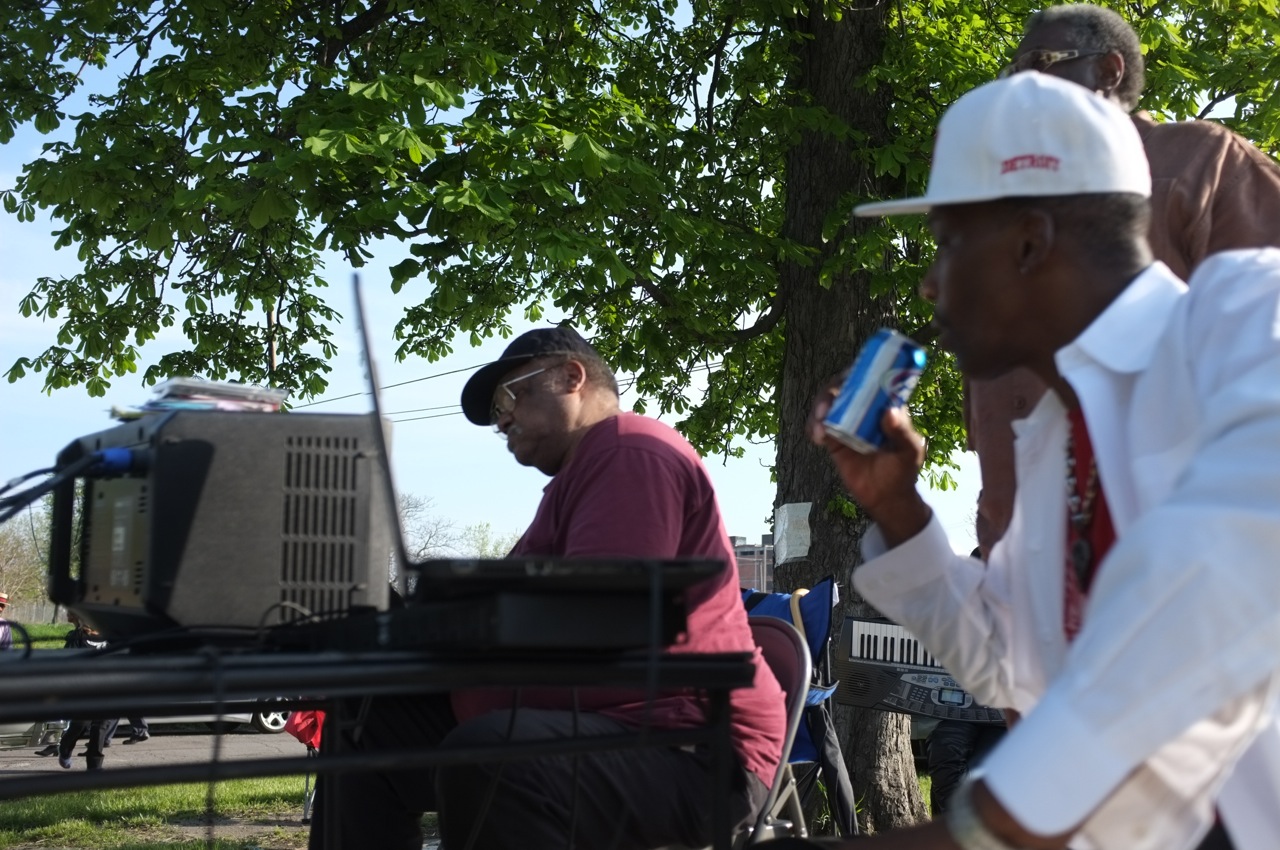