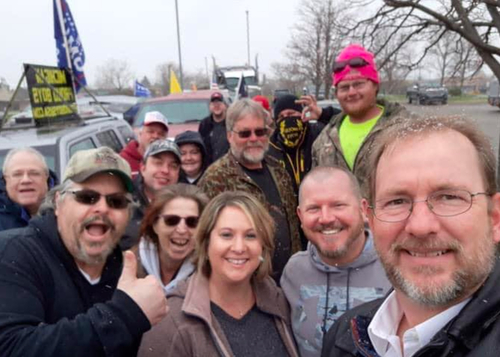 A Howell man vying for Rep. Elissa Slotkin's congressional seat appeared to violate a social distancing order when he took a selfie with a group of protesters ahead of a Lansing event Wednesday, one of whom was flashing a white supremacist symbol.

Mike Detmer, a 44-year-old Republican who works at a car dealership, was one of thousands who gathered for the hourslong "Operation Gridlock" protest outside the Capitol, which was initially billed as a vehicular protest.

Detmer says he gathered a dozen or so people together for a photo before they set off for the event from Howell. In the background, a nearby truck bore a sign that read "Proud Boys," a Southern Poverty Law Center-designated hate group known for its anti-Muslim and misogynistic rhetoric.

Detmer posted the photo to his Facebook page and later took it down.

He tells Deadline Detroit he was "photo bombed" by the man making the white power gesture and that he's a proponent of Whitmer's order to maintain six feet of distance from others.

"I don't know the individual who was in the background, I don't know this group that they're a member of," he said. "They're not part of my campaign. I didn't invite that individual to jump in the photo and when I posted it it just looked like somebody who was doing the 'OK' sign."

Detmer says "90 percent" of the people who departed from Howell for the protest were wearing masks and gloves. The people smiling in the photo took their masks off just before, he said.

Video from "Operation Gridlock" shows dozens of people gathered to protest in front of the Capitol steps, waving signs and chanting "lock her up."

In a late afternoon news conference, Whitmer said she was "disappointed" to see people closely congregating.

"We know this rally endangered people," she said, noting that coronavirus can spread among people who are asymptomatic.  "This type of behavior ... could prolong the amount of time we have to be in this (social distancing) posture."

Whitmer added that, in "sad irony," the very people peeved by the order "might have just created a need to lengthen it."

Detmer shared the gripe of many of those gathered — that the governor's order, extended last week, is an overreach and contains what they say are some arbitrary provisions.

"It's one thing to put information out for people to keep themselves safe, but it's another thing entirely to lock down states and lock down people, which is completely unconstitutional," he said in a video posted to his Facebook page.