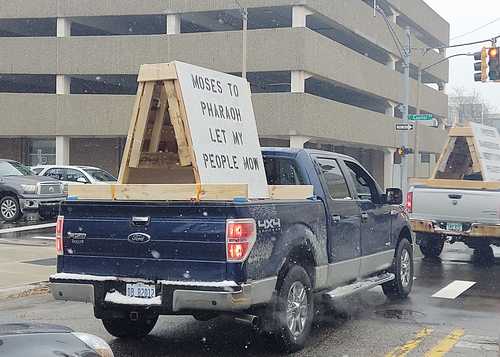 Michiganders apparently angered by roped-off big box store aisles of stuff they may not quite need descended on the state Capitol Wednesday for what was to be an in-vehicle protest of Gov. Gretchen Whitmer's latest stay-home order.

Drivers laid on their horns in cars and trucks adorned with American flags and Trump paraphernalia, according to media reports and posts on a Facebook event page. Vehicles displayed slogans like "Let My People Mow" — a nod to Whitmer's decision to deem lawncare an inessential service — and "Grounded by Gretchen."

Some exited their vehicles, gathering in front of the Capitol steps to wave signs and chant "lock her up." A photo posted and later deleted by a Republican vying for Michigans 8th Congressional District showed more than a dozen people squeezed together for a selfie in apparent violation of social distancing rules. One flashed the white power hand gesture.

Photos and video posted to social media suggest the vehicles trapped at least one ambulance and blocked a hospital entrance.

The latest iteration of Whitmer's "Stay Home, Stay Safe" order has drawn ire from conservatives who see it as an overreach. Some are frustrated the rules are in effect statewide, when most Covid-19 cases are concentrated in Southeast Michigan.

Her latest stay-home order is rubbing many citizens the wrong way, given the seemingly arbitrary stipulations. Garden seeds, paint and golf? Not OK. Alcohol, pot and lottery tickets? Go for it.

Then there was one protester who wanted the order lifted so she could get her hair done.

Michigan's Covid-19 case count has tripled in the past week to just over 28,000. Nearly 2,000 are dead, a likely undercount as many are reportedly dying undetected in their homes.

Whitmer expressed her disappointment over the lack of distancing and masks at the Wednesday rally in news conference held as protesters went on hour six outside the Capitol.

"We know this rally endangered people," she said. "This type of behavior ... could prolong the amount of time we have to be in this (social distancing) posture."

The "sad irony," she added, is that the very people peeved by the order "might have just created a need to lengthen it."

The event was organized by the Michigan Conservative Coalition and Michigan Freedom Fund.

Whitmer pointed out earlier this week that the latter group is backed by the family of Education Secretary Betsy DeVos. A spokesman for the DeVos' denied the family was directly involved when reached by the Lansing State Journal.

Someone spray painted the top of their vehicle: pic.twitter.com/MDZDR8pZk6