Detroit Cop Suspended While Investigators Look at Other Protest Incidents 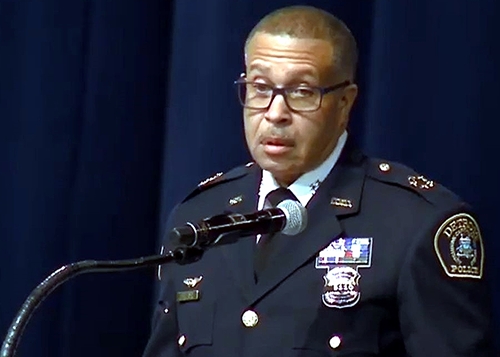 The officer was suspended with pay June 10, while the department’s Professional Standards Division investigates the incident that happened around midnight on May 31 near Kennedy Square, Detroit Police Department Sgt. Nicole Kirkwood said.

The Detroit Free Press reports that at least 11 other incidents involving police during the protest are under investigation.

"This Department takes every allegation of police misconduct seriously and, as has been the practice since I have been Chief, any officer who acted improperly will be disciplined," Craig said in a statement issued Saturday night. " DPD and the Board of Police Commissioners are investigating each citizen complaint and are actively collecting video evidence from body cams, building security cameras, and personal phones for a complete review of each claim."

MLive photojournalist Nicole Hester was hit by as many as a dozen pellets in her face and body, leaving welts and narrowly missing an eye, MLive reports. She was with her fiancé, freelance photographer Seth Herald, who was working for AFP, and Matt Hatcher, who was shooting for Getty Images.

The incident happened after the photographers were stopped by police on their way back to their parked car near Kennedy Square, around midnight and after protestors had largely dispersed, MLive reports. They had identified themselves as media and had cameras around their necks.

“While we are pleased that the Detroit Police Department is moving this investigation forward, I am concerned by the lack transparency and how long this is taking,” said John Hiner, vice president of content for MLive Media Group. “This was a serious attack on our employee, and on the free press. I want to see the evidence come forward, and those responsible to be held accountable.”

While Craig said the department took all allegations seriously, he tried to mitigate the police response by saying in his Saturday night statement:

"I respect the right of the protesters tonight to express their views on recent events."

"In the emotional outpouring following the murder of George Floyd, however, the protesters continue to fail to acknowledge the serious danger the city faced in those first few nights. The organizers initiated those first marches without making any plans for controlling instigators of violence and without any plans for dispersing the crowd at the end of the march."

"As a result, the Detroit Police Department (DPD) faced crowds who attacked officers with rocks, fireworks, and railroad spikes. They smashed windows of police vehicles and began breaking windows of buildings, threatening to bring the kind of violence and looting to Detroit that many other major American cities experienced."