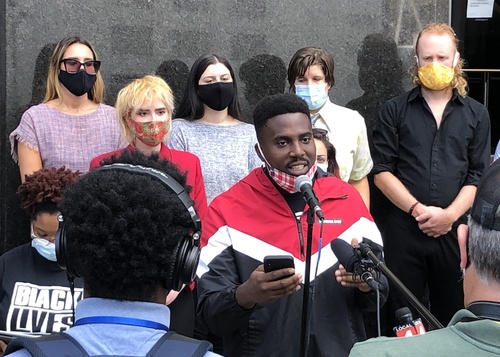 By Violet Ikonomova
and Allan Lengel

The group behind ongoing nightly demonstrations against structural racism in Detroit is suing the city a week after it says unprovoked police violence landed six of its members in the hospital, two for several days.

Demonstrators and police have clashed about a half-dozen times in more than 80 days of protests. The latest confrontation, last Saturday, saw officers club, shove and tackle demonstrators for refusing to disperse when they blocked Woodward at John R. Protesters wound up with lacerations that required stitches and severe swelling and bruising, photos provided to Deadline Detroit showed.

"I heard wails and screams of pain that night I will not ever forget," lawsuit plaintiff Caylee Arnold told reporters Monday in front of U.S. District Court downtown (video below).

Craig has claimed the response was needed to prevent demonstrators from establishing a “Seattle-type zone of lawlessness” — a reference to a police-free zone that remained in place for weeks in that city. But demonstrators said they had no such plans, noting no one brought a tent or provisions for a lengthy occupation.

Lawrence Garcia, corporation counsel for the city of Detroit, said he was “pleased to hear” the demonstrators were filing suit.

“The litigation will provide the city an opportunity to counter with our own suit — to stop further violations of law and to hopefully reduce the assaults on police officers,” he said.

"After thirteen weeks of protest and demonstration, what has been recently happening in the streets of Detroit is not about raising awareness around legitimate racial justice concerns. Wearing a bullet-proof vest to a protest, shows a certain desire and intent. What is going on nowadays is more about provocation and public nuisance than bringing power to the people."

For demonstrators who've participated in many of the protests, the department's response in the streets last weekend marked a new low.

“There was a different vibe to this one,” said Evan Villeneuve, who was roughed up by an officer while zip-tied. “They came in like they were ready for battle. It didn’t seem like they were so much interested in arresting us as they were beating our ass.”

Forty-four people were eventually arrested. Few media were present; the department at that point had stopped issuing the press passes it requires to cover the events.

At the press conference on Lafayette Boulevard Monday, lawyers and protesters spoke about what's behind the suit.

"In my city, Detroit, Michigan, the blackest city in America, I have a Black police chief that doesn't care about my Black life," said Jae Bass, an organizer who sustained minor injuries last month when an officer driving a police SUV floored it with him on the hood. "And that’s been proven time and time again ... We’ve been pepper-sprayed, tear-gassed, shot with rubber bullets ... [They've] put us in chokeholds, knees on necks.

"It's ridiculous that we live in a world with so much inequality and injustice, and anytime we stand up and speak up about it, we’re penalized, we’re beaten, we’re detained. We won’t be silenced anymore."

Caylee Arnold said police struck her in the leg with a baton and sprayed pepper gas in her face last weekend while they held her on the ground. Officers provoked violence with peaceful protesters, she said, adding that some seemed to celebrate the brutality.

“I saw officers smiling, they looked triumphant. I watched them give each other fist bumps and ‘bro hugs.’”