Trump campaigns in Michigan Thursday — but will he be back? 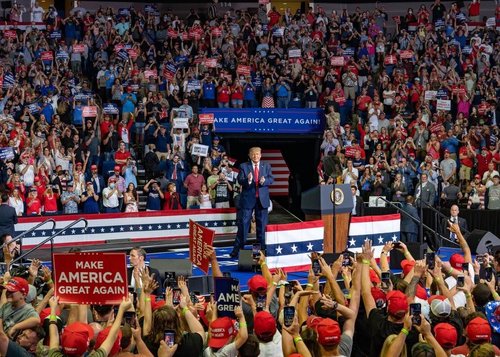 President Donald Trump visits Michigan today for the first time in nine months with a rally near Midland. But how much more campaigning will he do in a state prognosticators think he'll lose?

The president trails Joe Biden in most Michigan polls, and Politico this week reported that his "allies on the ground expect he could concede Michigan sooner rather than later."

Trump's narrow victory of less than 11,000 votes in 2016 will be extraordinarily difficult to replicate, the outlet wrote. He benefited then from low Black turnout and support from college-educated and working class whites.

The first group is likely to turn out in greater numbers this year as the result of a 2018 law allowing no-reason absentee voting, while suburbanites in Oakland and Livingston Counties have shown significant enthusiasm for Democrat candidates in recent elections.

Trump speaks at 7 p.m. tonight at an airport hangar near MBS International Airport in the town of Freeland.

Whitmer has called his visit "very distressing" for its potential to spread Covid-19. Images from other Trump rallies across the country have shown limited distancing and mask-wearing among attendees, and Trump has mocked people over their support for masks.

"We anticipate he’ll be descending on this state and perhaps encouraging people to come maskless," Whitmer told CNN's Anderson Cooper Tuesday. "Events like this threaten all that sacrifice that we’ve made."