The high-stakes election exactly four weeks from today has far-reaching consequences beyond the presidency and which party controls each branch of Congress.

"The court’s ideological leanings [are] in the balance" Nov. 3, according to Bridge Michigan.

One of [the] openings will fill the seat of conservative Stephen Markman, who penned the majority decision Friday and who is barred from running again because of his age [71].

The other spot up for a vote belongs to Chief Justice Bridget Mary McCormack, running for a second eight-year term. 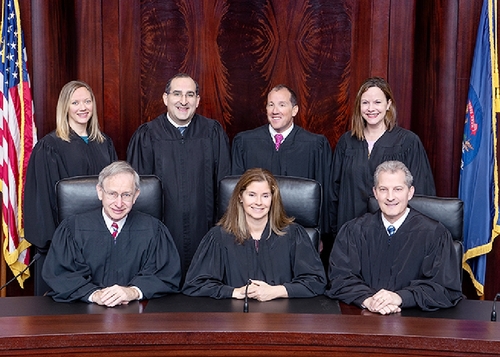 While Supreme Court elections are considered nonpartisan, major political parties still nominate judges to the ballot. Party affiliations are not listed on the ballot, though their incumbent status is, making it more difficult to oust a sitting justice. ...

The current court has a 4-3 conservative lean, though Republican-nominated justices have at times voted with their more liberal colleagues on partisan issues. ...

McCormack and Elizabeth Welch were nominated at the state Democratic convention in late August. If McCormack maintains her seat, and Welch, a former East Grand Rapids Board of Education member, is elected, liberals on the court will hold a 4-3 majority. ...

Michigan Republicans nominated two justices to the ballot as well: Mary Kelly, a former St. Clair County prosecutor, and Brock Swartzle, who is on the Michigan Court of Appeals. If both are elected, they would help secure a 5-2 conservative advantage.

On Monday, Laura Cox, state party chair of the Michigan Republican Party, sent an email to supporters urging them to vote for Kelly and Swartzle, saying the ruling against Whitmer's "unconstitutional power grab" is a reminder that the GOP needs to turn out to keep a conservative majority on the court.

The Libertarian Party also has two nominees on the ballot: Kerry Lee Morgan and Katie Nepton. The latter would be the first ever Indigenous person to serve on the Michigan Supreme Court should she win in November.

A victory for Welch and re-election of McCormack "would abet and extend the court's continuing recovery from an unhappy chapter of partisan rancor," the Detroit Free Press said last week in an editorial endorsing them. The Detroit News endorses McCormack and Republican nominee Swartzle.

Bridge sketches each candidate's background and posts links to their websites.