Question for the day: What the Sam Hill has gotten into northern Michigan law enforcement? Have they all gone nuts? 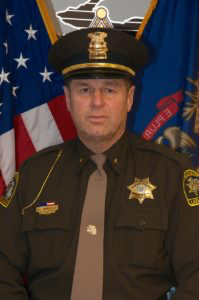 Bridge Michigan brings us the story today of the "constitutional sheriffs" Up North, who claim to be the final law enforcement authority in their respective counties, not Gov. Bossypants.

Although its adherents claim its roots are in "ninth-century England," the sheriff-is-the-final-authority belief is linked to the Posse Comitatus movement of the late 20th century, which gave rise to many modern militia groups. So-called constitutional sheriffs pick and choose which laws they observe, with many choosing not to -- here comes a surprise -- enforce restrictions on firearms.

But that doesn't mean they play favorites. Leelanau County Sheriff Mike Borkovich, who considers himself such an authority, reassures his residents:

“I don’t like hypotheticals,” he said. “But if a guy with a Trump sign showed up with a butcher knife and started swinging it at people, would we enforce that?

“If anybody is out of line, we would send our personnel.”

Good to know! Meanwhile, Barry County Sheriff Dar Leaf made headlines last week for suggesting the 13 men arrested last week in what authorities say was a plot to kidnap Gov. Gretchen Whitmer, may have only been trying to make a citizens arrest of her.

Meanwhile, the Trump campaign has been calling for volunteers to work on Election Day, collecting sign-ups at a website called Army For Trump. The buttons for various classifications are labeled "Enlist."

But please, leave your butcher knives at home, or if you must bring one for your personal safety, don't swing it at anybody. You might arouse the sheriff to action.