Detroit Will Breathe hit the road Saturday, staging a protest in Shelby Township to demand the police chief's removal. The march ended with arrests for blocking traffic. 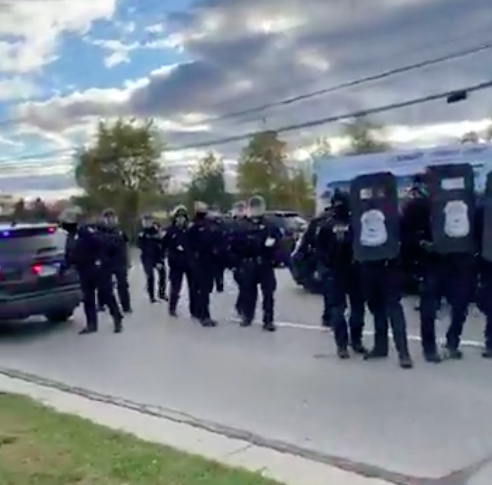 According to police, officers met with protest organizers at about 1:30 p.m. Saturday and advised them to stay on the sidewalk and not to block or enter the roadway. At about 4 p.m., the group left the parking lot at 23 Mile and Van Dyke and entered eastbound 23 Mile, blocking traffic, police said.

After numerous warnings to return to the sidewalk, the group of protesters refused. That is when the arrests were made and several vehicles were issued citations for impeding traffic, police said.

Marchers claim the police used excessive force against the protesters, including shoving, "(kneeling) on necks" and tackling.

One woman appeared briefly stripped to her underwear. Protesters claim she was strip-searched against her will, but police say she slipped out of hand restraints and took off her clothing.

Protests have targeted Shelby Township since last summer, when police chief Robert Shelide was found to be posting offensive tweets "glorifying police brutality." Shelide was suspended, but kept his job.

Detroit Will Breathe posts a video of part of the march:

A post shared by Detroit Will Breathe (@detroitwillbreathe) on