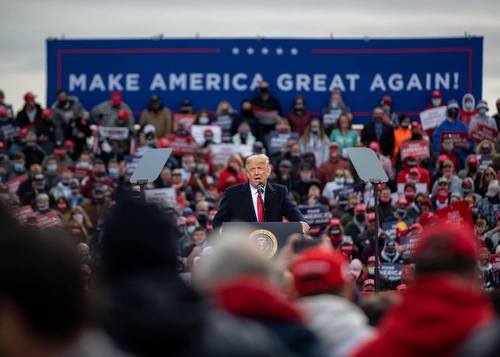 Trump remains heavily invested in Michigan in the lead-up to Election Day, and will by Monday have made five stops in the state in less than a week.

But can he win? Only if he runs up huge margins in the state's less populous counties, says Zach Gorchow, executive editor and publisher of Lansing-based Gongwer News Service, in a new column gaming out the possible outcomes.

Here's what Trump's up against:

Based on the Democratic tsunami building in Oakland County, Mr. Biden looks poised to net gain a minimum of 55,000 more votes out of that county than Ms. Clinton did and it's entirely possible that number could reach or even surpass 100,000. In either case, it's more than enough to make up the nearly 11,000-vote deficit from 2016, especially when multiple sources in both political parties have told me they do not expect Mr. Trump to run up as big a win in Macomb County as he did in 2016. Mr. Trump cannot afford to lose votes out of Macomb, but by all indications he will, it's just a question of how much.

There's zero energy behind the minor party candidates, who siphoned away more than 200,000 votes in 2016. There's a lot of national polling data indicating that voters who say they backed a third party candidate in 2016 who are not going to do so this time heavily favor Mr. Biden. That's more help for him and trouble for Mr. Trump.

And Kent County, which narrowly went for Mr. Trump four years ago, almost surely is going to go for Mr. Biden this time.

The president needs to make gains, Gorchow writes, in the 76 counties where he beat Clintion by an average of 60 percent to 40 percent in 2016. There's been "huge effort" by Republicans to register new voters in those areas, the Lansing journalist adds.

Trump could also get a boost if some Democrats — who are believed to be more likely to vote absentee — fail to turn in their ballots on time. More than 700,000 absentee ballots issued by clerks that have not yet been logged as received. A disproportionate number of those are in Detroit, where Biden needs a big win.