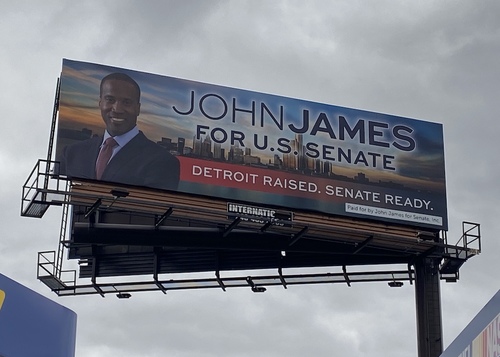 Republican businessman John James wants an investigation into the race he against Sen. Gary Peters that he lost by over 80,000 votes, saying he has "deep concerns that millions of Michiganders may have been disenfranchised by a dishonest few who cheat."

James has refused to concede since the race was called for Peters Wednesday around 8 p.m. In an email to supporters Thursday afternoon, he claimed there was enough "credible evidence to warrant an investigation to ensure that elections were conducted in a transparent, legal and fair manner," but did not explain what that "credible evidence" might be.

"Those who object," to an investigation, he concluded, "likely have something to hide."

James, who's 83,314 votes behind in the near-final results (below), hasn't called for a recount.

James' undermining of the election results without evidence comes as Trump boosts unfounded conspiracy theories from his supporters about dead voters and fake ballots (one cockamamie claim says broadcast news reporters are smuggling such ballots into vote-count sites through their equipment).

Peters, for his part, appears to be taking it in stride. During a news conference at a cider mill Thursday, The Detroit News reports he "laughed heartily when told that the James campaign said it was cheated out of an election win amid allegations of voter fraud."

“It’s sad and it’s pathetic," he reportedly said. "They lost.”