Elissa Slotkin to Cabinet, GOP colleagues: 'If you are silent, you are complicit'

The newly re-elected Democratic congresswoman from Holly reacts to presidential comments Thursday night. Before first winning her seat in 2018, she worked for the CIA, the director of national intelligence, the National Security Council, the State Department and the Pentagon. This is the text of four tweets.

President Trump has been telling us for six months that he would contest the election if he didn't win.

Now that we're here, it is time for every leader, from the president’s cabinet to local elected officials here in Michigan, to choose: fealty to President Trump, or democracy.

History is presenting a real test for the people who have downplayed the president's anti-democratic words and deeds. 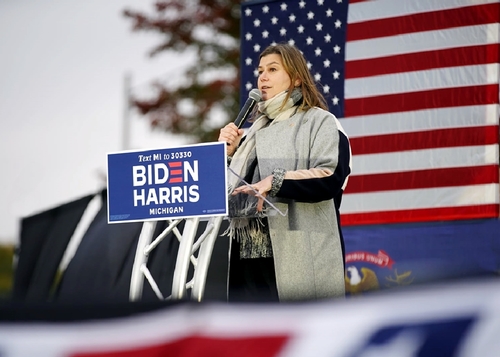 Elissa Slotkin: "If you remain silent, you are complicit." (Photo: Facebook)

Cabinet officials need to signal, clearly and publicly, that they will not aid the president's attempts to undermine our elections.

Senior Republican elected officials need to speak out, now, to make clear they will not participate in attempts to thwart the will of the voters.

If you remain silent, you are complicit.

I am not asking my colleagues to support Joe Biden. I am asking you to stand up for our country.