This week is a mixed bag for Michigan. The state showed ballot-counting efficiency with Wednesday night presidential election results, but also has a second-wave Covid surge that set three daily records for most new cases.

The latest figure of 6,225 confirmed diagnoses is a new one-day peak. 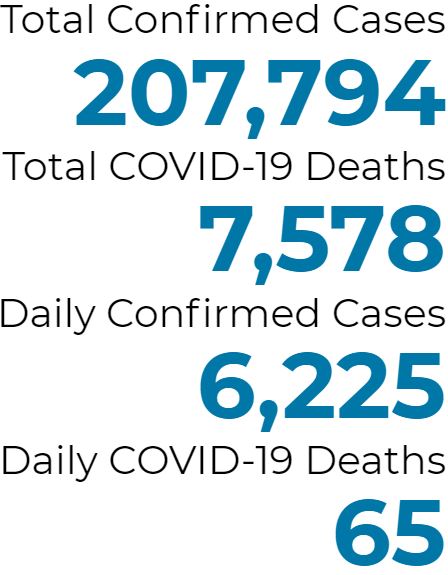 Michigan added 65 deaths Saturday, including 42 that occurred earlier and were identified belatedly during reviews of death certificate data. It now has 7,578 confirmed coronaviorus deaths since mid-March.

This week's 29,614 new Covid cases brought the total to 207,794, according to the Michigan Department of Health and Human Services.

"We are recording a record number of cases each day in Michigan," Gov. Gretchen Whitmer said hours earlier in a statement reacting to her party's presidential victory. "I look forward to working with [Joe Biden and Kamala Harris] as we continue to fight the spread of Covid."

Earlier this week, the state's chief medical executive, Dr. Joneigh Khaldun, said: "We have models that estimate that at the rate we are going, if we don't do anything else, if we don't change our behaviors, we could be seeing up to 100 deaths a day by the end of December.

"We are really at a tipping point right now when it comes to Covid-19 in the state."

The Detroit News posts this context for the past month:

The state has seen a surge in recent weeks and accounted for 20,154 cases last week, which shattered the record set the week before of 13,129 confirmed cases and the 10,241 cases recorded three weeks ago.