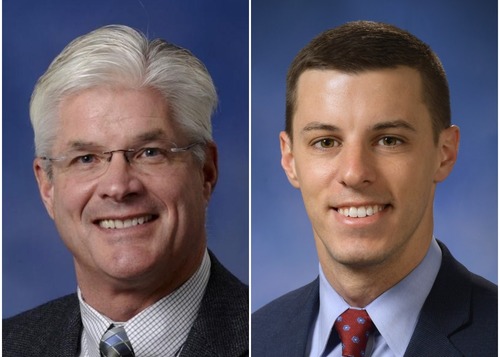 A flurry of longshot lawsuits, baseless fraud claims that rile his base, a reported call to the Wayne County canvassers who carried his water, and now, a visit with Michigan's top Republican lawmakers.

President Trump is pulling out all the stops as he seeks to undermine Joe Biden's decisive victory in the swing state. According to an anonymous source cited by The Detroit News, on Friday he'll host Senate Majority Leader Mike Shirkey and House Speaker Lee Chatfield, three days before the Board of State Canvassers is set to decide whether to certify Michigan's election.

News of the meeting came as two GOP Wayne County canvassers said they wished to rescind their decision to advance the heavily Democratic county's results. The board members caused an uproar Tuesday when they initially refused, citing the largely inconsequential and recurring issue of imbalanced poll books in Detroit.

Also Thursday morning, Trump's team withdrew a federal suit in the state, saying falsely that it had achieved its goal because the Wayne County canvassers declined to certify the results.

State GOP lawmakers holding hearings to examine the integrity of the election have yet to uncover any evidence of widespread fraud that could alter the results of Biden more than 145,000-vote victory, The News reports.

Shirkey told The Detroit News on Tuesday that he doesn't expect the results of the state's presidential race to change as lawmakers examine the voting process. "Elections have consequences," he said.

Biden is in the lead, Chatfield acknowledged Wednesday.

"But President Trump is still the president of the United States and he's not conceded this election. And my job is to investigate reports of fraud and reports of irregularities," Chatfield said. "That's what we are going to do. When the time comes for there to be a concession, then I am sure that will happen. ... But we're not there right now."