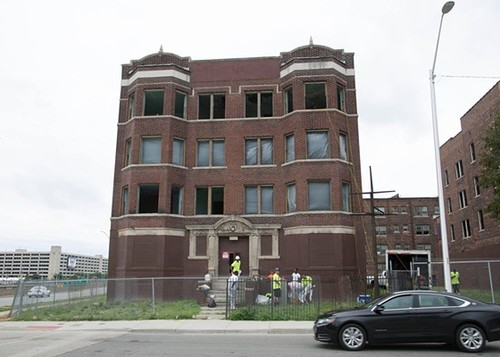 Once slated for demolition, 2447 Cass is now targetted for redevelopment.

The Ilitch family's Olympia Development is out with another press release promising housing in its District Detroit arena zone, where no new housing has materialized since it was first promised more than six years ago.

According to the Free Press, the company plans to renovate and redevelop six historic apartment buildings in the lower Cass Corridor, four of them vacant and two occupied.

In a twist, two of the buildings targetted are ones Olympia was accused of trying to illegally tear down three years ago, after telling Crain's they lacked "viable redevelopment potential." A historic district has since been created to make their demolition more difficult.

The $60 million project would create 170 newly renovated apartments, with 84 of the units reserved at lower rents for income-qualified tenants — including the existing renters, said Keith Bradford, vice president of the organization's Olympia Development. In addition, a seventh and smaller former commercial building on Henry also would be renovated and turned into "community space."

The project is a partnership between Olympia Development and Cinnaire Solutions, a nonprofit community development group.

The latest housing announcement comes with a 2017 promise for 686 housing units around the arena unfulfilled. Olympia is, however, in the process of developing more than 90 units in the historic Hotel Eddystone.

The company has faced scrutiny in recent years for failing to deliver on its development promises since it was given more than $400 million in public subsidies to build the arena and a 50-block entertainment district.