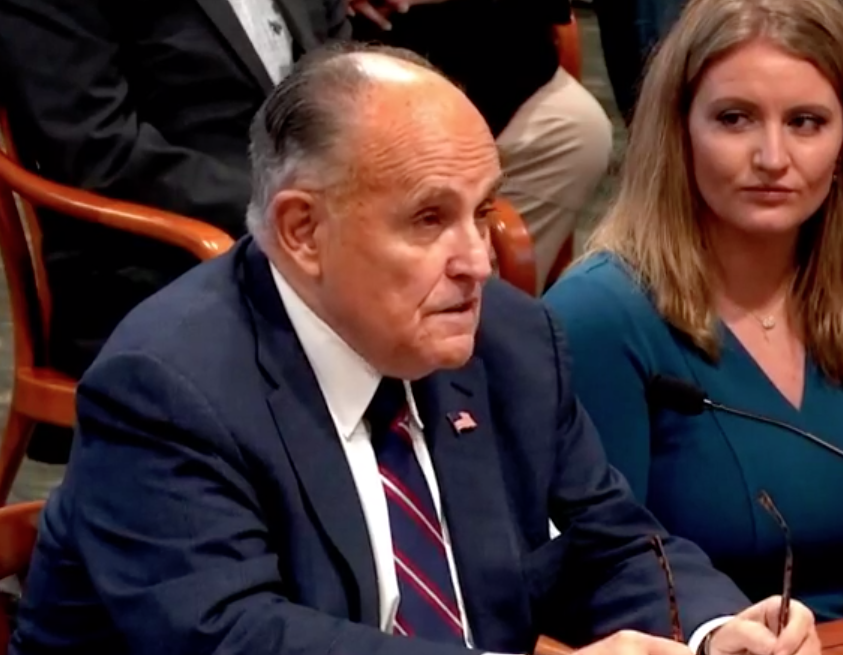 It turned out that the first day of election-related testimony in Lansing, held on Tuesday before Michigan's Senate Oversight Committee, was, like so much great entertainment, only the opening act. The headliners, with M.C. Rudy Giuliani, were reserved for Wednesday night, before the House committee.

So much of it was outside the norms, for starters. Several journalists noted that Giuliani was permitted to question witnesses, although it seems wrong to call them "witnesses," as none were sworn in, including Giuliani, who is acting as a lawyer for the Trump campaign and seeking to overturn the state's vote.

Let's go to the tweets, shall we?

Rudy Guiliani is now questioning the witnesses that he brought. this is the strangest House committee hearing I have ever seen.

So, best I can tell, this meeting of a Michigan legislative committee has been entirely turned over to "the president's personal lawyer" with chairman @RepMattHall's only instruction being that Giuliani be done w/ them by about 9 pm... members apparently can't interrupt

Yes, it was a very strange hearing, spanning four and a half hours. The content was the same as Tuesday's -- lots of claims of bad behavior in the polling places and counting rooms; concerns that some poll workers might have been wearing Black Lives Matter masks; and other contentions that courts have found not credible. There were a few standout moments, like this woman -- sorry, we don't know who she is, because no Chyron -- who said she thinks all Chinese look alike:

One of Rudy Giuliani’s witnesses just said she thinks “all Chinese look alike” while making the argument for a voter ID requirement in Michigan pic.twitter.com/WUCYRTzmgu

But then it was time for the breakout star of the evening, Mellissa Carone, who was ID'd as a contractor for Dominion Voting Systems, and we're thinking that contract won't be renewed. Sometime between when her new Facebook profile picture with Giuliani was taken and her testimony, she slapped on a coat of bright-red lipstick, pulled a few more strands loose from her messy bun and prepared for her closeup. Which was a doozy:

You really need to watch that video, in which she interrupts Rep. Steven Johnson, shoots questions back at him, wags her finger, wags her head and makes outlandish claims. Stacks of 50 ballots were run multiple times, she said. Johnson tries to gently lead her to coherence, wondering if that were true, why the poll book balances weren't off by thousands of votes, not the 400 or so out of 250,000 cast.

"Whatja guys do, take it and do some something crazy to it?" Carone drawled.

She claims Detroit turnout was 120 percent. (It was not.) She estimates the poll book balances are off by 100,000 votes. (They are not.) That dead people voted. (True, but Secretary of State Jocelyn Benson's final report on absentee voting records 3,469 ballots were rejected because the people casting them died between their submission and election day.) Back and forth Carone went with Johnson.

And then she says: "I know what I saw. And I signed something saying that if I'm wrong, I can go to prison. Didju?"

Weep for Mellissa Carone, who sacrificed so much for this moment in the spotlight:

my life as been completely destroyed by this, says Carone. I've lost families and friends. I can't get an actual job anymore.

The hearing concluded at 10:30 p.m. And at this point we feel kinda sorry for straight-news reporters like Craig Mauger at The Detroit News and Dave Boucher at the Freep, who were required by the conventions of journalism to file deadpan accounts of this shitshow. Because if there ever was a time to regret that Hunter S. Thompson is no longer with us, it was this week.